with High Defiance, Crown of Thorns, Supahead at The Rat
by Frank Turner

It was with much trepidation that I made my way to this show, as all ages afternoon gigs are not exactly my favorite setting for taking in bands’ performances. Yet I made the trek to Kenmore Square nonetheless, and, steeling myself, headed down the stairs for a listen.

The first band of the day, High Defiance, was already on. Lots of hair and headbanging going on, but the drummer was really slammin’ and the guy scratching added a lot of tasteful tidbits to the songs. These guys have a lot of energy – look for good things from them.

Next up was Crown of Thorns. I was told by Zephan from Stompbox that these guys were from NYC, but they spent so much time talking about Brockton that I couldn’t be sure. At any rate, these guys were mean and hungry and their music was utterly viscous – the blood-thirsty dancers in attendance were disappointed only by their short set.

The next band up (and the band I was sent to review) was Supahead. I like this band already, so it was difficult for me to understand why the audience thinned out so much before they went on. Although there was little for them to feed off of (and in spite of the brutal hangovers bassist Bob Maloney informed me they were all suffering from), they managed to grind through a pretty giant sounding set of songs.

The first good sign was Bob’s uniquely large bass tone – fat, mean and fuzzy – as he led into the first song. The super-fuzz double guitar thing is reminiscent of Soundgarden, especially considering that Darryl looks a little like the young Chris Cornell. But the band quickly erased any doubts about their originality, and as their set progressed, it became clear the only shadow cast over them was there own. I personally enjoy dark music, and believe me, these guys were dark.

All in all, Supahead’s music grinds you down to that dark place from which they seem to draw their inspiration; it’s loud, fuzzy, driven, and bombastic, wearing the listener down as opposed to grabbing him by the throat. Instead of making demands on you, their set takes you to the muddy place it came from without asking, and before you realize you’ve been taken. The repetitive, churning rhythms become hypnotic, and throw a sullen and comfortable blanket of darkness over the mind – kind of like coming down off a month of smoking bad grass…

As for Stompy (that’s Stompbox, folks), what can you say? These guys have been touring hard on and off, and it shows – they sound big, mean, and sharp, and are tighter and heavier than ever (not to mention louder). It’s always good to have them back, so catch them while it’s still so easy. 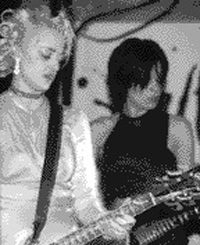 Women of Sodom – at The Limelight – Review