at the Tam
by Jen Beatty

It was a packed house, supported by an audience of other local favorites such as Jennifer Trynin and Letters to Cleo. The Gravel Pit opened the set with two new and unknown tunes before turning to their more familiar stuff. Quite a risk to take when you’re fairly new to the Boston music scene. Hailing from CT, The Gravel Pit have all the components of a straight-forward rock band, with the added use of keyboards. I was impressed by their set enough to dish out $10 for their CD, Crash Land. The disc is not as good as their live performance, but contains strong songs like “Burn,” “This Old Clock Doesn’t Make Any Sense,” and “Sing A Long.” If you like the pop-alternative sound, check out Gravel Pit at the Rat with Letters to Cleo, Plush, and Jules Verdone on February 4. 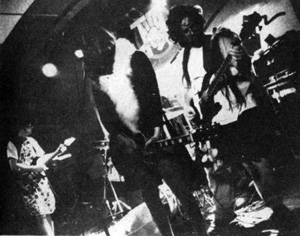 Bunny Brains – with Knifeboat, Kustomized at T.T. the Bear’s – Review

Mistle Thrush – at the Soon Release Party at The Middle East Cafe and T.T. the Bear’s Place – Review