with Hollywood Squares, Lars Vegas, Soothing Sounds for Babies at Carlos Fest 5 at the Middle East Cafe
by Sheril Stanford

Call it a variety show for those in the know, Ed Sullivan for hipsters. The fifth Carlos Fest at the Middle East had everything: In addition to the bands, there was a belly dancer, an Elvis impersonator (female), a poetry reading, an excellent comedy performance piece by Chucklebucket featuring two women dressed as Dalmations and a man dressed as a dog catcher, and even a tuxedoed emcee, complete with red bow tie and cummerbund. A small TV sat in the middle of the stage throughout most of the show, sometimes glowing static snow, sometimes showing Betty Boop cartoons, old movies, or a bizarre original video by one of the members of Soothing Sounds for Babies.

The audience favorite of the night seemed to be the Hollywood Squares, who organized the Fest (allegedly named after a character in a Squares song). When they hit the stage wearing face paint, some sort of diaperish garb, and in stocking feet, I was prepared for some awful frat party crap, but the Squares are actually quite likable. Their set was in keeping with the variety theme that marked the show – their style varied from rock to blues-funk type stuff, to reggae, including one twangy number that was almost countryish. Their photographer was so frequent a stage presence that I came to think of him as a band member. A high point of the set was a song with the lyric “James, you make me paranoid,” dedicated to the photographer.

The Squares were followed by Soilamatic. Some may think that this gentleman is The Next Big Thing, but, all you struggling bands out there, take heart. If this man can get an audience, so can you!

Then there was Lars Vegas. If you like tongue-in-cheek-loungelizard-pseudo-jazz type entertainment, complete with crooning vocals, stand-up bass, xylophone, and sax, nobody does it better than Lars Vegas. The best thing about them is their lyrics; they address subject matter that is seemingly light and frivolous, but somehow, on delivery, it takes on a more ominous tone. Good examples: “I guess I should shut up and eat my liver…” and the Sy Sperling/Bunnyman medley – more than a goofy song about hair transplants.

Soothing Sounds for Babies delivered a strong set, energetic, noisy and all over the place, lyrics successfully treading the fine line between sweetly naive and idiotic.

Ed Sullivan would roll over in his grave. 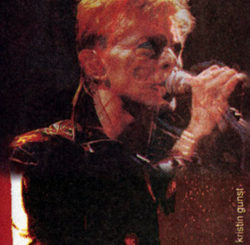