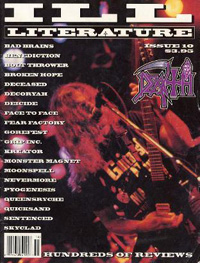 With 140 pages of interviews and chunky reviews, Ill Literature is so densely packed with information it’s almost daunting. The coverage is mostly metal (for lack of a better word), but also delves the current greats of the punk/hardcore scene. For some reason, probably an attempt to broaden the horizons of the ‘zine, there are also reviews of many top selling indie/alternarock/what-the-fuck-ever releases. Listed alphabetically within appropriate sections, it was rather disconcerting to see the Spudmonsters (Massacre), Stagediving To The Oldies (Restless), Strapping Young Lad (Century Media), Strife (Victory), Sugar Ray (Atlantic), and Tanner (Caroline) all on a two-page spread. All but one was written by editor Marco Barbieri (Yes, the same Marco as the former publicist of Metal Blade, now publicist for Century Media, and still one really nice guy.). The reviews of non-heavy music are objective, descriptive, and kind. Too kind for my taste. They sound as if they’re written by heavy-orientated reviewers trying desperately to say a positive word or two about music that doesn’t interest them. The coverage of extreme music, however, is thorough and very respectable. I’d almost go so far as to say that Ill Literature is THE reference guide to heavy music. What it lacks in strong opinion (“This is amazing!”/”This sounds like it was recorded in a sewer pipe!”), it makes up for by being comprehensive.

Layout-wise, it’s a mixed bag. Larger-than-usual text make it an easy read, however, low resolution graphics (typical of many ‘zines, unfortunately) make some pages an eyesore. A few are actually painful. Other than that, Ill Literature comes highly recommended as a resource to all that is heavy. 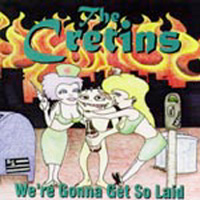 The Cretins – We’re Gonna Get So Laid – Review 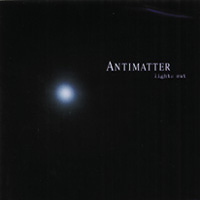