at Mama Kin
by M.I. MacDonald

While their latest CD left me intrigued, but not hooked, Jack Logan and Liquor Cabinet‘s show at Mama Kin led me up a trail of cigarette butt clues that ended centerstage. Oh, so this is what all the hoopla’s about! While the mix was a tad muddy for the first half of the set, it was infinitely better than the sound at most of the other venues where we ogle the up-and-coming of rock. A general relocation closer to the back of the room (and the sound board) crystallized things significantly.

An unassuming band, Logan and his enablers are refreshingly unaffected, with a laid back, earnest, rock-til-you-drop stage presence that ensures the audience gets more music for their hard-earned bucks. No posturing or pretension, just straight out and straight ahead.

While it can be difficult to credibly factor in for review the craftsmanship of the songs in a live show, a quick listen to one of Logan and Co.’s CDs reveals poetic promise, and they surprised me with a pretty kick-ass gig. A tight-knit band of experienced musicians, the Liquor Cabinet displays the cohesiveness born of countless hours spent playing together in jam sessions that probably began with the guys straggling, still dressed in their workingman’s clothes, and doubtlessly stretched into the otherwise quiet late night darkness. No dueling guitars here, just furious tandem guitar licks flying through the air with the greatest of ease. These musicians interplay in a supportive fashion, as a good band rather than a bunch of solo players squashed together in one place.

Although the CD better highlights Logan’s smooth vocal subtleties, Jack Logan and Liquor Cabinet’s live performance provides a much more three-dimensional musical experience, and really showcases the easy unity of their musicianship. They built up steam over the course of the evening, and by the time they crashed through the fun and games of “He Threw Up On The Replacements,” they were wallowing in a cacophony of exuberant noise. Even their bass player couldn’t resist jumping around like his feet were on fire. Hell, with the din they left ringing in the air as they left the stage, I would be surprised if the soles of his shoes didn’t melt off. 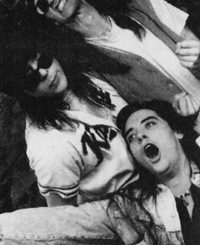