Turbo Tom started his performance by snorting a condom and removing it from his mouth. He followed that by swallowing it and blowing it up and out of his nose. 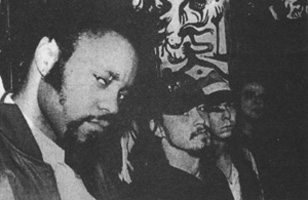 They mix the rapcore thing together with beefy vocals and a pleasant death roar: Quite a tasty mix to these ears.

Unlike most bands found on the Top 40 charts and MTV, Mistle Thrush is not afraid to cross stylistic boundaries.

Pleasant for an opening band. They played some decent songs that reminded me of my older brother’s eight-track tape collection back in the ’70s.

While their latest CD left me intrigued, but not hooked, Jack Logan and Liquor Cabinet’s show led me up a trail of cigarette butt clues that ended centerstage.

Guitarist Eric Masunaga reminded me of Thurston Moore as he seemed to get lost in his own distortion, and would then quickly change over to a mammoth groove. 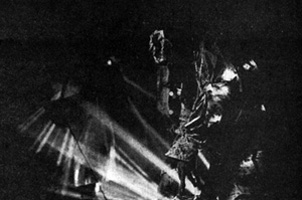 The trio sounded even better live than on record. The songs have a more aggressive energy, and the soaring three-part harmonies outshone those on the album.

Barkmarket – 1-800-GODHOUSE – Good record in a one-man Butthole/Cave kinda vein. The cover’s so simple yet so f’in creepy that no one dares pick it up.

The master of setting. David Lean took us to parts of the world we could never afford to visit. He put the word “splendor” on the map.