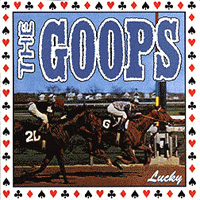 “Singing the praises of pop/Fanning the flames of punk.” I wish I could say I came up with that line, (but I didn’t), because it’s a dead-on description of The Goops‘ perfect marriage of raw punk power and some of the finest attributes of pop. Guitarist Brad Worrell describes the band’s sound as “aggressive pop,” but that’s a wildly understated pronouncement. Sure, there’re plenty of pop elements, but the acknowledged influences of The Clash and Stiff Little Fingers are written all over The Goops’ major label debut, Lucky.

Together since 1991 (at least vocalist Eleanor Whitledge, guitarist Brad Worrell, drummer Jeff Bennison, and bassist Steve Mazer became permanent members in 1993), the band claims to be from NYC, but Worrell actually hails from Sturbridge, a small town in mid-Western Massachusetts. The Goops’ name is derived from a 1930s collection of comics that allegedly depicted the bad habits of bored children. “The Goops are a band/The Goops are wise/They kick their friends/And lick their knives.” Whatever. It’s an attitude thing.

This disc is simply loaded with attitude, both lyrically and in terms of its delivery, due in no small part to the raspy, smart-ass vocals of Eleanor Whitledge. Lucky has a sort of wholesale, go-for-it feel, with lyrics focusing on the unrestrained fulfillment of appetites and desires. A blatant example of this is the second track, “Vulgar Appetites;” a bit leering, yes, but you ain’t seen nothing yet. Whitledge wails on “I Want You,” exemplifying the rampant sexuality in this collection. When you think about it, you really don’t see much of that in the indie/alt music world these days, and you sure don’t see it in today’s punk. Maybe this is the start of a trend; if so, I, for one, approve. Or maybe that’s where the disc diverges from punk in form. Oh sure, there’s some social commentary, namely “Change Your Mind,” chronicling the epidemic of whiny, lemming-like behavior in our society, and there’re the murderous metaphors of “Matchhead” in which the mother of a killer laments “It’s not how it looks…”

But the best tunes simply swim in down-and-dirty sexuality, delivered with driving, pure punk abandon. It’s a heady combination. When Whitledge asks, “Will you suck me like a hard candy?” backed up by kick-ass speed guitar, you get the sense she means business. And imagine these lyrics set to a rollicking, hard-edged Clash-like tune: “Don’t you wish you had these eyes/These tits/These slender finger tips/This brain/This ass/A fraction of my class?” In the finest Brit-punk fashion, a later verse of this truly excellent selection, which is called “You Wish,” changes the last line to “Shove it up your ass.” 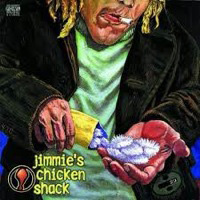 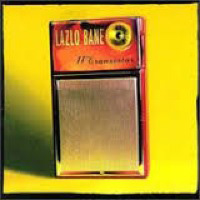