A Few Of My Favorite Things

Generation after generation asks the same questions: Why did the Howells and Ginger bring so much stuff? Why did the Professor carry so many books for a “three hour tour?” The only ones who could’ve been expected to bring so much crap on board were the Skipper and Gilligan, and they wear the same clothes every day.

What I’d bring if there was a chance I’d be caught on an “uncharted desert island” (the stuff I truly can’t live without. I carry a duffel bag instead of a pocket book!):
1) A generator
2) My cell phone (you certainly don’t expect me to leave it behind, do you?)
3) My vibrator
4) Books (at least two): Swan Song by Robert McCammon and Blue Belle by Andrew Vachss
5) Avon Skin So Soft (SPF 30 – to protect my tattoos)
6) Prozac and/or Xanax
5) A bottle of Sensitive Ear and a tube of triple antibiotic ointment (in case the natives are into ritualistic tribal tattooing and piercing)
6) Issues of Lollipop [butt kisser! – Ed.]
7) The prerequisite photo album full of pictures of my kids
8) A CD player and the ten CDs I can’t live without: Reign in Blood (Slayer – the best CD ever made!), Nevermind (by some group called Nirvana – perhaps you’ve heard of them), Live Through This (Hole), Teknowhore (Bile), Into The Pandemonium (Celtic Frost [R.I.P.]), The Dark (Metal Church), The Best of Twisted Sister (for those nostalgic moments), Urban Discipline (Biohazard), anything by Anal Cunt (for target practice), Vivas Machina (Hittman).
9) It would be nice if my friend Lianna was stuck on the island with me – we’d have time to brainstorm and write tons of junk for Lollipop [another shameless plug – Ed.] – but she’d make me clean so maybe it would be better if I left her on the boat.

A Few of My Favorite Things – Guilty Pleasures – Column 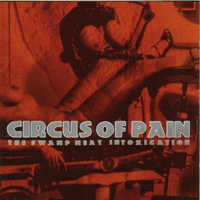