The Macho Film had its beginnings in the theater of ancient Greece and crystallized into perfection during the middle part of this century with the work of John Wayne, and then a little later with Clint Eastwood. More recent times have found us in the fun but ignoramus realm of the Sweaty-No-Neck-Badass-Motherfucker. I am talking, of course, about Stallone, Van Damme and all the rest. While certainly these current Macho Film superstars have pushed no-neckedness and testicular shrinkage to a new level, they have also reduced the genre into something slightly blander than vanilla fudge. Wayne and Eastwood often played characters with some grit to them (often more than was apparent). Grit would reek havoc on the current Macho Guy’s hair cut, and interrupt their muscle sheen. Their films are Hallmark Cards to Macho Blandness. To all this I have only one thing to say. Thank you sweet Jesus for Harvey Keitel.

Harvey Keitel lives in the dark side of the Macho. He is the pimple inside of Macho’s anus – blistering and burning amongst all that sweat and Macho-shit, wanting badly to burst in a fountain of blood and puss and dramatic soliloquy. But he can’t. That is Keitel’s formula of genius: torment, torture, restraint. Even when he is beating someone to death with his bare hands, the inner demons still churn and bite. Catharsis is rare in his world, and short lived. Over and over again in the roles he has inhabited throughout the years, he has played different variations on this holy trinity. He is perfecting the Jungian shadow side of Macho where ugly is just ugly, and not cool – and as a result is expanding the spiritual boundaries of the genre as a whole. He is the entire starship Enterprise of Macho Film, boldly and intensely and sometimes bare-ass nakedly going where no Macho Guy has gone before. 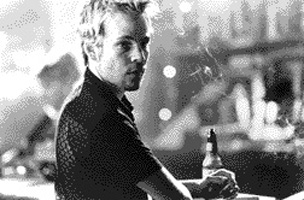 The modern day western, City of Industry, finds the dark master at the top of his game. Keitel plays Roy Egan, a sort of post-modern Man With No Name, who rides a bus instead of a donkey. Roy goes to Palm Springs to help his kid brother drink some beer and take part in a jewel heist. It’s not clear where he came from, or even if he came from anywhere (like most Macho Guys, Roy is more myth than man). Though the heist goes well, the gang is double crossed and executed by their evil-little-shit driver, Skip (Stephen Dorff, who else?). Roy somehow manages to survive by hiding in a sewer pipe. After stealing a car, he heads to L.A. and for the rest of the film he makes it his mission to hunt down little Skip, avenge his little bro’s death (i.e. fuck Skip up unto death), and get back the goods. Because it is a Macho Film, he will beat on people, get fucked up, beat on more people, get more fucked up, and then beat on more people while getting even more fucked up. Because it is a Keitel film, there will be no satisfaction.

City of Industry swims in themes of emptiness and corruption, no frills attached, with an intentionally unsatisfying pay off at the end. More than anything else, it’s a beautifully bleak parody of the American Dream, a gritty fable concerning the rat race. Stephen Dorff’s Skip actually looks like a rat, with his skinny little appendages and greasy spiked hair and sharp teeth (though this could just be Stephen Dorff). Keitel, in his portrayal of Roy’s Teutonic drive toward achieving his goal and utter lack of humor, does a good job personifying the film’s message which seems to be that the free market (or is it just life?) in its corruption has taken the soul out of humanity – or at least people who live in L.A.

When John Irving, City Of Industry‘s director, isn’t making sissy pictures like Turtle Diary, or Widow’s Peak, he is crafting some of the most impressively gritty Macho Films ever put to screen. The Dogs Of War is easily one of the most ugly Christopher Walken films ever made, and Raw Deal remains the most beautifully unglamorous of the Scharzenegger vehicles. How does Irving do it? Total lack of any sort of artistic aesthetic. Irving doesn’t stylize his violence like Peckinpah, nor does he treat it with mock-realism (which of course on film, makes it unreal and glorified), like Scorsese. Instead, he presents his violence that satisfies our Macho Lust but isn’t all that fun either. The violence he directs is cold and hard and gets under our skin even after the film ends in a way that doesn’t call attention to itself and is therefore is much harder to shake off. If Keitel brings out the themes of City Of Industry then Irving provides the texture, and it is one of concrete, dirt, and ennui. The film is gritty like a bad clam, but not in the current independent film way. It is neither glamourous nor sketchy, it is the aesthetic of no bullshit – the invisibleness of street reality.

I have a feeling there will be a lot of people who will walk away from City Of Industry feeling let down. Shit happens. City Of Industry is about about drifting through the vacuum after spiritual bankruptcy, and of course, ass kicking. But watch out, ye of weak constitution, for this film is a subversive stab through the armor of Macho. Once the spirit is gone there can be no redemption, no release. More savvy watchers will have guessed this even before they go into the theater: you can squeeze Keitel all you want but he still won’t pop. 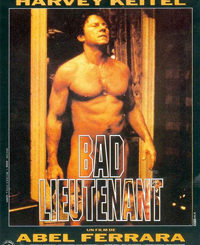 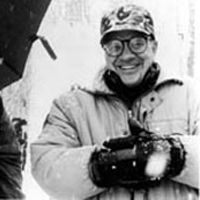 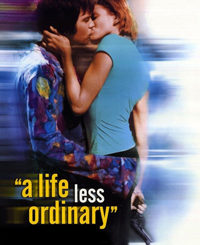