with Trauma School Dropouts, Blount at the Rat
by Mindy Slobodkin

I arrived at the Rat at 2:03, fortunate to be only one hour late after drinking all night and somehow? waking up with a headache to end all hell. Not to my bewilderment, the show had not yet begun. When finally the doors opened a half an hour later, I made my way to sit by the stage, listening to Alvin and the Chipmunks singing The Beatles’ Greatest Hits. At around 2:30, Trauma School Dropouts came on-stage to the strains of “Stayin’ Alive” to begin their soundcheck. (What the hell were they doing for two hours anyway?)

This band seemed confused by their Bauhausian identity. As the singer Duane tried desperately to stir up any reaction from the crowd, my only thought was to react by throwing something large and breakable onto the stage. After sitting on the stage for the first few songs, he made his way to the floor where (surprisingly?) no one was moving. There style seems to have changed a bit since their first album featuring “Too Many Drugs.” As Tom, the rhythm guitarist wearing a Motörhead T-shirt, ripped on his camouflage guitar, and the Lance look-alike bassist jumped around stage like a cocker spaniel, I just couldn’t help but thinking “Oh god, when will the guitar player (Henry) put his shirt back on?” I was extremely unimpressed with their Redneck Style poetry, and suddenly felt like I was at a Violent Femmes concert back in 9th grade.

L.E.S. Stitches: The singer put forth his “Billie Joe best” while complaining about his hangover, before playing “Pretty Dead,” and I sometimes wonder about the sanction of good quality music when an individual resorts to singing about taking shits with such passion (as featured in “Stuck In A Phase”). The set improved drastically midway through when Mick Brown (vocals) wailed out “Disgusted,” which exemplifies his repulsion with his life, music, and mind, and at the time exemplified my repulsion with the quickly-penetrating odor of B.O.

Blount: Originating in Sunny California, now claiming to live in their van, Blount maintain a very upbeat Screeching Weasel-type sound. They seemed elated with Boston’s knowledge of their lyrics, which far surpassed their own! Then proceeding to ask if “this club lets you move around” which the crowd was not deeply engaged in, opting to stand by the stage shouting lyrics instead. Definitely worthy of the gathering they accumulated, this band ruled so much, if I wasn’t so fucking broke, I would actually have bought the Fearless compilation.

Also on the bill were Bastard Squad, The Cretins, and The Parasites. I left midway through Bastard Squad, whose excited drive to offend everyone and anyone could never be too much to handle. Their rendition of Boston bands sucking was dedicated to The Cretins who were more than happy to have been showered with a variety of things thrown at them by Jerry on vocals. Personally, I was most entertained to watch him shove a Snapple bottle down his tighty whities after having grabbed himself a few dozen times. Unfortunately, I had to leave, unable to catch The Parasites or The Cretins, so I could go work my shit night job for $6 an hour.

Sugar Ray – with Lordz of Brooklyn, Korn at Axis – Review

Thirteen – with The Pushstars at The Other Side Cafe – Review 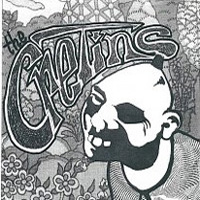