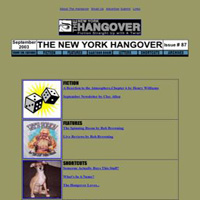 “If anyone finds out I got this in the Edgemont High School library, Ms. Lawton is gonna fry,” I thought. I furtively lettered the words “freedom rock” over a college-ruled portrait of the bookkeeper herself, while calming heart palpitations over the first stirring newsprint ever to blacken my astringent-slick fingers. The closest things to this I’d encountered were mad, hallucinogenic rants supplied as “don’t let this happen to you” examples in my shockingly candid health class hardcover. The text read like a poorly translated libretto for my teenage life, which was of late boiling off into striations of the bizarre. It was this publication that first rended my young brains into a psychic omelette, yielding such creative endeavors as “Ingmar Bergmann Collides with Quentin Tarantino: An Evisceration of the Existential.” This was my first encounter with The Village Voice.

After four years of study halls spent hunkering over the intellectually entropic periodical, I had to admit the inevitable: My favorite bratty rag was becoming thematically threadbare. The window to my urban Neverland was growing thick with suburban grime.

Today, as I yawningly convert obscene e-mail forwards into scrap paper for grocery lists, my jaded self is shocked for the first time in years. I see mismatched fonts, short fiction that serves the reader only with a few lasting images before vaporizing into a concluding paragraph, and a healthy serving of smug Roswell aliens gracing most pages. This is James W. Eckle’s New York Hangover, and although it does not approach coherency, it does dare to wipe clean The Voice‘s filthy urban peepshow window. Once again, Westchester kids can revel in newsprint whose sole purpose is to reshuffle tender grey matter.

The Hangover throws printers’ grounds in the face of Starbucks, prints top secret memorandum from the alien president to Heaven’s Gate personnel, and reflects fondly on the gay movers’ industry. It publishes a “Triple X” column that may not cause any collegiate e-mail subscriber to flinch, but is bound to jolt most Clearasil consumers into a sudden understanding of free speech.

Older readers may be bored with the running moans published against the East Village’s growing yuppification. For younger consumers, however, this may be new news, and could serve as fodder for endless angst-driven garage bands. Urban legends are recycled here, as well, such as the tale of the young man who purchases gloves for his date and panties for his sister, then mixes up the enclosed cards. While it may not be strikingly new for the 30+ set, the New York Hangover makes great under-covers reading for any repressed boy scout, and could rouse fascinating discussions if placed strategically on the back of the suburban family toilet. 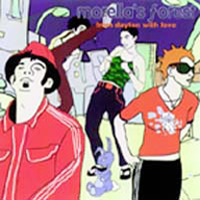 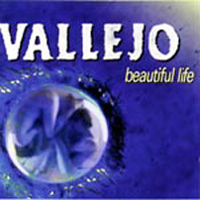