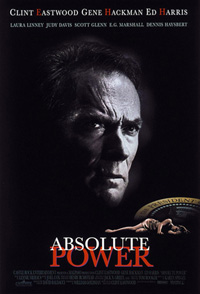 Sure, Eastwood’s gettin’ old (his glaring-from-beneath-the-eyebrows shots are getting almost silly as his eyebrows get bushier, and grayer. You don’t see monobrow Dan Hedaya pulling these tough guys shots, do ya?), and yeah, he gettin’ sensitive (let’s not even talk about that Bridges lapse in judgment), but he can still keep your attention glued to the screen like a fly to fly paper. Surrounded by great actors, Eastwood stars as Luther Whitney, a supposedly retired thief of high regard. When some old coot’s house is robbed, he’s the prime suspect. The break-in, coincidentally, is one of those rare scenes where there is no dialog for a long time, yet the simple, precise actions of a brilliant thief are more interesting than action-packed car chases and/or shoot outs. Then we get into the messy business of Luther hiding in the vault when the drunk residents roll in, witnessing the President of the United States roughing up his date, getting his butt whooped by the young filly with a letter opener, then watching her get her voting privileges revoked permanently by trigger-happy secret service agents. The coverup is organized by a flaky, breakdown-waiting-to-happen chief of staff (Judy Davis), the secret service goons (Scott Glenn and Dennis Haysbert) cleaning away any incriminating evidence. Haysbert only gets a few more lines than he did as the last-minute driver in Heat, but he seems to speak best with a high-powered rifle. Scott Glenn is pretty much always a bad ass (where does Hollywood find these ruggedly intense-looking men with features so chiseled it looks like there are trenches running along their cheeks?), and he gets the “fuck yeah!” award for telling the silver spoon-fed powertrip suit bitch, “Every time I see you I want to rip your throat out” without an ounce of emotion. 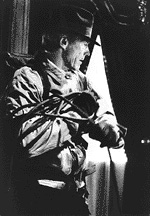 Absolute Power, while not stooping to rehashing some “Make my day” one-liners, relies heavily upon good, tight, believable dialogue. Ed Harris (as a DC cop) gets to chuckle like a nervous schoolboy while repeating for the umpteenth time that it’s no trouble to get calls anytime because he lives alone. It ain’t exactly “Failure is not an option,” but it sure beats “Keepin’ it real.” And when Harris casually interrogates Eastwood, a seemingly dottering old sketch artist in the museum, the subtle playfulness of their innuendoes is simply beautiful. Various other scenes display the actors (usually politicians – same thing) lying through their smiling teeth, ordering people killed as if they’re ordering a tossed salad on the side, and basically all the underhanded, vicious business we like to blame on those in the public eye to whom scandal is a fate worse than death. Countering all that, we have Luther, a patient, thoughtful, highly skilled robber, and his attempts at reuniting with his daughter, a tough-as-nails prosecutor. While she thinks he was never there for her, even when he wasn’t in prison, the photos lining every flat surface in his home prove otherwise. He’s always been there, always shared in her joys and victories, but from behind a telephoto lens so as not to interfere with her life. It’s not often you get a movie that builds tension as hitmen assemble complicated rifles, makes you burn as cocksucking liars like the President (played by Hackman) get away with murder and betrayal, and yet gives you the warm fuzzies with a calculated burglar who misses his daughter. 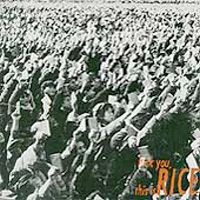 Rice – Fuck You This is Rice – Review 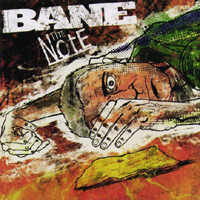