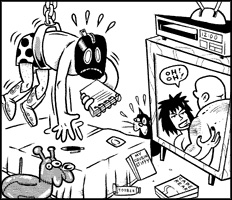 Get Smart from Smut

While the first lesson I learned was that having passionate sex while someone climbs over you, around you, and between your legs with a camera is not nearly as easy, not to mention erotic, as it seems on TV, other lessons were soon to follow. “Boy do I look dumb” is a common reaction to finally seeing your antics immortalized on celluloid. The throes of wild abandon look more like the graceless seizures of a fish out of water, and the expressions of utter ecstasy, like a drooling idiot trying to recite poetry in a foreign language from memory. Oh yeah, that’s a turn on.

Dramatics in the heat of the moment resemble fumblings on film, and transitional maneuvers become clumsy lumberings. In truth, the highlights of the home movie, those which save it from being erased to make way for yet another soon-to-be-dusty archival tape of some ignorable romantic comedy/action/adventure flop, are the goofy ham-ups for the camera. If you ever wondered what expression you wear when you’re slurping special sauce out of the thick straw, or tongue-painting eyebrow-deep between the flesh pillows, now you can chuckle over it. And for those who actually have fun having sex (why do you think it’s called “having a good time?”), humor translates to film much better than intensity. The rest must be done with lighting, advanced filming techniques, and a helluva lot of editing.

The Lowdown on Going Down

I’m of the delusional majority of men who think they know how to munch a muff. Unfortunately, watching porno movies hasn’t done much for my educational background. The minor details aren’t exactly easy to catch, and we all know success is in the attention to detail. Long hours of tongue-on work have either given me a certain skill set, or perhaps I’ve just been blissfully beating a dead horse and no one told me. The best advice I can give is to follow the signs. Both partners should encourage the wave-crashing movements if they want to keep surfing. Another helpful hint: Don’t assume you know what you’re partner wants. What made the last lass glisten and get gooey might not have the same effect on this Miss. Sure, men hate to take direction, but letting her steer your ears gets her where she wants to go. Adapt route as necessary, gentlemen.

In contrast, there is an awful lot to learn about playing the skin flute from watching porno movies. Many of the same hints to men apply to women: allow yourself to be guided, judge from the response what works and what you’re doing only ’cause you think it works. After viewing only a few oral gymnasts on screen, you’ll note the diversity in techniques. This is not only because each of the actresses do it differently, and not only because the actors prefer something different, it’s because the predominantly male-audience wants to watch it done differently. And moreover, they like it done differently. What looks great on screen is sometimes rather ineffectual in practice. But it sure looks good. My advise is to watch and learn, then use whatever techniques are most befitting your goal.

The Bump and Grind

Self-filming taught me that I have bad posture. And I don’t use my arms much. While watching pornos makes me feel less inadequate about not maximizing my appendages (I think gravity is to blame for much of it), it certainly rubbed my nose in repeating those same dozen or so positions. A sexual tri-athlete I am not. While many of the positions used in the more obscure movies are nigh-possible, painful, or unnecessarily difficult, many, many a novelty can be worked in to break up the monotony of the usual work-out, and bring forth a desirable effect. The trouble is having thirty feet of silk rope, a Pyrex-cone-sized dildo attachment on a helmet, various-sized suction cups, a black cape, and a bedroom that looks more like a jungle gym than a love-making den. And let’s be honest, most of us can’t do back-bends, much less talk our partner into being suspended from the ceiling wearing a costume more foolish than The Road Warrior meets Batman. Ten minutes of getting in place to explore thirty seconds of a new move is not an efficient expenditure of energy. But it does add diversity. And perhaps a trip to the chiropractor. Most of us would be pleased, ecstatic even, if our romps were as active as WrestleMania. Just get in shape first, OK?

The dialogue in porno movies is even dumber than that of sit-coms. And that’s pretty dumb. Fortunately, no one is taping all the really inane things we babble in the heat of the moment. At least, not as far as we know. I prefer silent movies in this case. I gather I’m not missing much. While I’ve heard an occasional noteworthy off the cuff one-liner, most of the dialogue is drivel. And the roommates/neighbors all know what you’re doing. Like in the movies, most of what’s said during sex is completely ignorable. It’s the inspiration behind what’s said that’s important. While I usually want to slap anyone who howls and bucks like a wild horse when all I’m doing is rubbing their thigh, I certainly do appreciate a bit of feedback. Nothing worse than panting and sweating and straining every muscle in your body, all the while wondering if your partner fell asleep with their eyes open. Breathy cooing in the air, a good, long moan every so often, a large gasp for air; it feels as good to let out a groan as it does to hear one. And the choking and yelping and grunting and barking and growling and shrieking is pretty cool when shared and not merely a solo performance. As far as trash talking, incessant repetitions of monosyllabic exclamations, and loud, sustained yowls, well, judge from the response of the partner. And then do what you want anyway. Fuck ’em. But some of us want to have sex with someone, not have a cheerleading section shouting progress reports and instructions. I’ve always wondered why anyone would keep yelling “Fuck my ass” when it’s already being done. 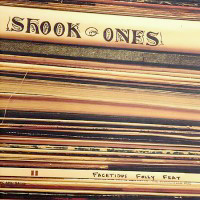 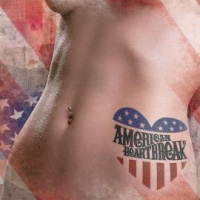