At the Rathskeller (R.I.P.)
by Austin Nash

What can I say about Down By Law that you don’t already know (post-Last of the Sharp Shooters review, post-interview with Dave Smalley), except that I am beginning to think that DBL is in danger of being caught in some sort of space/time genre warp. The show was a “mohawk” show, a bunch of kids there to see punk in the form of Anti Flag (who were so-so, I had to keep a low profile due to trashing their last album). Nineteen-year-old kids doing what Eater and the Pissssssstols did 15 years ago.

I had the feeling that I was seething in some timeless netherworld as Down By Law went into their third or fourth tune. One-third of the crowd had disappeared, and they went on to play short due to it “not being their type of crowd,” and I’m thinking, what is their crowd? Nobody else seemed to know either. Dudes my age don’t show up to see Dag Nasty anymore, and DBL doesn’t play it. They’re billed with and considered punk, but the punk kids don’t consider it. It’s not particularly political, though Smalley has an MS in political science, and it’s not particularly melodic, which would play more to the straight pack alternapunks (those who might go see Foo Fighters, or STP).

I thought the show rocked, but the crowd peaked when AF was doing that overfucked Mission of Burma tune (with no guitars – the crowd on the stage kicked out the amp plugs. Punk, huh?), and just stood around watching the old guys. Well… for you old guys, you seem to be hesitating as to a logical direction to follow and keeping the thing alive. I picture it like the Star of David (upside down) with DBL in the center, Mahler on one point, Sublime on the one to his left (downwind), The Verve Pipe with their “freshman” release scratching their nuts on the south point (Brent Oberlin, how does it feel to lose to those guys? It went platinum), with some loser named Fiona and Marilyn Manson cutting toes on the others. The middle is where bland bands sit ’til they decide which point to travel down, or to give the goddang thing a sixth (fuck you, Satan). Down By Law needs to pick a distinctive direction in order to pursue to maintain the interest of those who would pay their bills, or risk being in the sights of that sharpshooter. 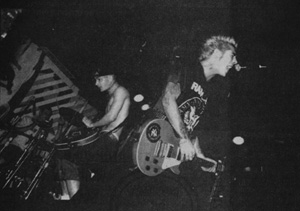 Rancid – with The Queers at Axis – Review