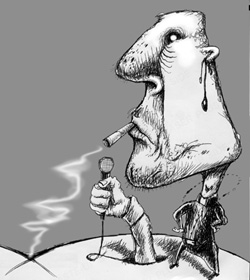 I remember the first time I heard Christian rap. It was 10:04 pm on July 4 of the year that PJ lived with Weeds in Logan Square. That would have been 1988 or so. True to Chicago’s summer climatic patterns, the evening had cooled the city only slightly and decreased the humidity not at all. Even at that hour, sticky heat rose in waves from the asphalt and clung to my face. The city’s collective sweat ran in rivers down the street. I was headed for an Independence Day party at PJ’s. In those days, the gentrification of the west side was at least five years away and Logan Square was still in ruins. A few doors shy of PJ’s Kedzie Avenue apartment, a graffiti-splashed Baptist Church, once burned and only partially repaired, usually crumbled in lonely disuse. On that night, however, the holy joint was jumpin’, or gettin’ down, or, actually, I’m too old to know the correct slang to describe it. At any rate, a rapper bounded the chancel steps, bustin’ and rhymin’ – or something – for an impressively large crowd.

As rappers were not known for love of country, this concert’s scheduling on the most patriotic eventide of the year was curious. Not that this bothered me. I had earlier exhibited my zeal for God, kin, and Country by sleeping in and waiting for the phone to ring with directions to the inevitable barleyfest by which every holiday was marked in those years. After a few seconds watching the acrobatic MC, it became apparent that more than a rap show was taking place. This brouhaha was church-sanctioned, a holy revival at ear-splitting volume. I stopped to listen, convinced I was witnessing a landmark of bad taste. The energetically delivered sentence fragment, “Got to love Jesus” was bookended by metronomic clinking from an inexpensive beat-box amplified well beyond the staticky limit of the church’s modest PA. Nonetheless, the phrase, aptly delivered with a hint of musicality, rung in my head all night. It rings there to this day.

After five transfixed minutes, I left the rapping Rev. and his audience of Spanish-speaking preteens and made my way to PJ’s roof. Like widespread erratic gunfire, Independence Day firecrackers detonated across town, their crisp reports punctuated by the low-altitude Chrysanthemum bursts of more expensive home fireworks. Cooled by delicate rooftop breezes, entertained by the sounds of a city at war for the sheer fun of it, I drank beer from a can and chain-smoked Export A’s, absolutely certain the world as I knew it had no more than six months left. Had I been clearer in my analysis, I would have known that the world for which I predicted doom, the world of obsessive music fandom where right and wrong are divided along the qualitative lines of stunning vs. mediocre sounding, or innovatively hip vs. commonplace, was nothing more, and nothing less, than the world inside me, my soul, my selfhood. Something died inside me the night of the Mixin’ Minister, and I still grieve for that “something.”

If this were a church testimonial, or an episode of the long-running radio drama “Unshackled,” this story would end with me answering the hip-hop altar call and giving my life to Christ. No such thing happened. Instead I was left with a deeper confusion of the sacred and the secular. Street level new music, which had previously been nothing but delightfully profane, had been rudely adopted by sacred operatives. Nothing could ever be the same.

Coming of age in Chicago in the late ’70s, I was one of many miserably self-absorbed pubescents seeking rescue from the bland, civil service directionlessness of our parents through the religion of rebellion engendered in whatever rock era music variant caught our fancy at the time.

In 1998, such an assertion sounds so naive as to be ludicrous, but it was true nonetheless. The most sacred tenet of the music rebel’s religion was that the sounds you used to define yourself – be they the sounds of Run DMC in the waning eighties, the Clash ten years earlier, or Sleater-Kinney more recently – had to be so extreme, so in your face, so out there, as to defy co-option by any forces other than those in the rebel camp.It would take me years to figure it out, but this was the source of my disappointment and dysphoria at the sight of the def cleric. No organization could have been more closely associated with the MOR blandness from which I was running than the Baptist Church. If mainstream Protestants were moving in musical territory usually reserved for anger merchants like Ice T, there was nowhere, musically, to go and still be certain of your vinyl collection’s ability to offend.

I went through the motions of passionate musical definition for many years afterward. To some degree, I go through them still. I suppose I should be happy the difficult sounds I’ve championed over the years have become tremendously popular. But I’m not. It’s disconcerting to hear the Ramones and Nirvana in the supermarket. Call it blind nostalgia if you will, but I’d go back anytime to the days when Iggy Pop was still scary. In those days at least, it was easy to get a good idea who your friends weren’t. 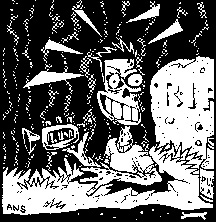 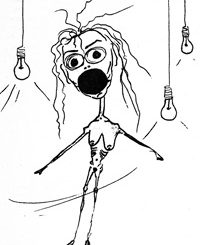 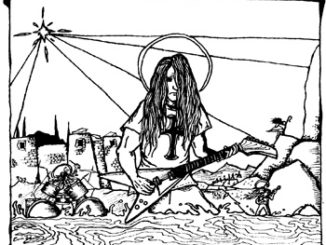