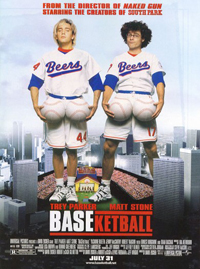 OK, so it coulda been better, but at least there are moments (most of which are in the trailer) that’ll stay with you and you can quote for cheap chuckles every so often. While it sounds like a dream come true (coincidentally, the name of the vaguely-defined “Help Handicapped Kids” organization in the movie), having David Zucker of the famed Abrahams, Zucker, and Zucker team responsible for Airplane! and the Naked Gun series, as well as numerous one-offs, work with the sick gents who create South Park, BASEketball doesn’t quite go the distance. Cubicled critics may bitch and moan about the degenerating state of taste and standards, not to mention cheap laughs and bodily function obsessions, BASEketball is pretty damn funny once you stop expecting it be really, really funny. The plot is simple enough, so it’s the details of the twists, not to mention the constant bombardment of sight gags and one-liners, that are meant to carry this movie. Anyone looking for anything other than confused chuckles at numerous improbable situations, you’re in the wrong theater, shithead.

Coop and Remer (Parker and Stone) are post-high school losers who have a close bond, practically their own language, and who start their own sport. It’s a mix of basketball and baseball in which no one has to run or move much and teams taunt one another trying to make the batter/shooter screw up (called a “psyche out”). They get funded by a millionaire who agrees sports have become mercenarial and gaudy, he dies, and Coop has to manage the team. There’s also an attractive, large-breasted woman (Yasmine Bleeth) involved (isn’t there always?) who both friends fall for, and spend the rest of the movie competing for her attention. A greedy competitor (Robert Vaughn) gets between the friends and tries to ruin the sport to pad his pockets, but, um, everything works out in the end and everyone goes home to get laid. That’s the plot and, as I said, no one cares. The beauty is in the details. Loudmouth Jenny McCarthy acts out many sexual innuendoes (laying carpet, buffing the lobby, licking the chrome off doorknobs) literally. Powermonger Vaughn gets head cramps as Coop and Remer need to be threatened repeatedly because they misunderstand, and extra chickens are vacuumed off the field in the background at the end of chicken night. (Reminds me of the human pigeons and their droppings on the statue behind Val Kilmer and the cute-yet-ultimately-unmemorable girl of the tender park scene in Top Secret.)

Commentators Bob Costas and Al Michaels get to say all the goofy shit they probably wish they normally could (“You’re excited?!? Feel these nipples!”), much like the TV announcers on South Park (“and here with the story is a midget in a bikini tied to a donkey”) and, um, Bob Uecker in Major League (hey, it had to come up, didn’t it?).

The sight gags and zany humor of movies such as BASEketball aren’t the type that can be explained. You have to see them. And while critics and fans of the style may not like BASEketball as much as some of the classics, BASEketball does grow on you (I’ve had it on four or five times in the background or with friends over, and I find myself falling into it and chuckling again and again). And hell, Wrongfully Accused, Mr. Magoo, Spy Hard, and many, many others have fallen shy of genius, and BASEketball isn’t all that bad in comparison. And the soundtrack rocks. 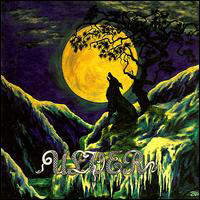 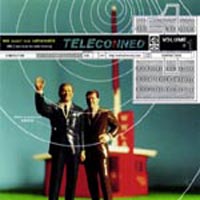 Telconned – We Want the Airwaves – Review