Emissions From the Monolith

OK, I went to the Emissions festival in Youngstown, OH. If you missed it in People, it’s a three-day event of heavy groovin’ bands typified by the term “stoner rock.” “Stoner Rock” being a heavy liquid amalgam of Sabbath, Soundgarden, Skynyrd, Sleep, Scientists, and ’72 (yeah, the year), all filtered through the tension-release mechanism of the Blues—>The Who—>Helmet binary reflex. Juiced up by those who know the value of drone, mantras, noise, headbanging, Witchfynder General, and Motörhead. It’s great. Even the bands that those who pen for different journals would typify as “punk” groove hard into this feel, albeit faster. Plus, PBRs were a buck and a half and, well, tequila’s two bucks. Imagine what that means to someone from NY, Chicago, Portland, etc. Yes, the booze per bux ratio was in their favor. Also, a barbeque was set up for good cheap hot eats, you could come and go as you pleased, and the Nyabinghi staff arranged for pleasant weather.

The Nyabinghi is in a semi-rural area of Youngstown, OH, a place perfect for passing out on the lawn. Fact: I saw a Beagle and Terrier/Lab mix talking about the singer for Earthride, who may’ve been very close to that unconscious state.

The Beagle inquired “Is he passed out?”

The Lab/Terrier confided “No, he’s talking to one of his friends who isn’t here. Spacecakes, I believe.”

The Beagle remarked “Yeah, lots of people seem to know that Spacecakes character.”

The Lab/Terrier sighed “Must be nice.”

The event went off… Ahead Of Time. 35 bands. Ahead of time. Under ten minute load in/load outs, and people there for everyone. I was there from the get-go at six o’clock Friday night. After two hours, all I could think was “If I were in a band, I’d go home and practice.”

I only missed 4.5 bands – mainly due to injury. Well, I also had to go get my, uh, vitamins. Twice. The line-up really didn’t need a traditional “headliner,” the crowds swelled by seven o’clock or so and stayed. So some of the lesser-known bands got face time with the great unwashed and the energy level was cracklin’. Something about playing with good bands and a full house brings out the berserker in the tamest of beings. Trust me, you don’t wanna follow Tummler and suck. New Tummler out on Small Stone this year: Put it on the X-mas list now.

Spirit Caravan cancelled due to breakup. The Brought Low cancelled due to breakup. Halfway To Gone cancelled as their singer was driver/valet to Ben Ward of Orange Goblin during that unit’s foray into the U.S. this summer. The Glasspack was supposed to fill in but couldn’t make it. So what? It didn’t really matter. The quality level was so high, especially among the lesser-known units, after a couple bands, a couple $2 shots, some vitamins, and a small tasty apple, I was happy as a hippie with free dope.

This Greg Barrett guy who owns the club, books the event, and generally ring-leads the shenanigans, he’s a crafty fucker. He interspersed the quicker, rockier, and punk ID’d bands – Lamont, Disengage, Boulder, Milligram, and Electric Frankenstein – with the more orthodox stoner, doom, whoosh-zoom prog space power rock, and dirt hog bands for maximum impact. So if you needed to take a break or had specific tastes, you had time to relax, play tunes on the awesomely stocked jukebox, or buy some stuff from bands or the labels in attendance. Man, the Relapse guys had a boatload a cool stuff on hand. Bring at least a bill to spend on merchandise, it’s cheaper than usual and they give you the lowdown on anything on the table.

Surprise #1. How hard the “dirt-hogs” rocked, and how their tunes stuck. Lost Goat‘s potent update of gritty hard rock split the difference between Mudhoney grunge, Blue Cheer/Big Brother and the Holding Company ballroom drug swirl, X/Dream Syndicate/Leaving Trains roots rock punk, and Come’s pained downer ballads. Eric Peterson’s tweaked, off-kilter guitaring mated ringing ker-chunk chords with Keith Levene’s (PiL) chiming and drilling and Neil Young’s spidery sting. You get away with this by having a goddamn great bass player. They did. After their set, Varney* said “Jesus! I need all their records! Go get thirty bucks from my wife.” Hey, he’s got 10 inches of reach on me (his wife has 15″), what could I do? Plus they’ll put the CDs in the car. Did you know possessions in your car are covered by car insurance?

Kung Pao and JJ Paradise Players Club checked in with a steamroom fulla Killdozer, Tad’n’Flipper riffs gooped up with ZZ Top’s dirty dishes and a lascivious presence all enjoyed tremendously. Kung Pao have t-shirts with a picture of a chicken copied from a fifth-generation Chinese menu. Why don’t you get you one? Special note: Because of vitamin deficiency and a huge cut on my arm, I missed the Superhighway Carfire (hmmm… I think they may’ve missed me, Varney says they were a no-show ) and almost all of DragonGreen. Got the discs later, both good. They’re two of three releases on Infernal Racket Records. Yup, that means they’re battin’ at least .666 and I bet number three (Rabies Caste) is strong, too.

Surprise #3. Totimoshi. This three-piece got the spot vacated by Spirit Caravan. Top of the bill, opening night, pinch-hitting for a legend. Luckily they don’t sound like Spirit Caravan so they couldn’t get tarred with the “clone” brush. What they do sound like is an on-fire kick-ass power trio utilizing metal range and tones and the lessons in dynamic groove’n’riff of many of the finer units that’ve littered the Touch & Go/Amphetamine Reptile ’80s and the rocker part of the Skin Graft/Relap.03se ’90s. If you need a quick and dirty tag, call’m a heavied out …Trail Of Dead, and put’m on your next party mix between The Jesus Lizard and High On Fire and eject all complainers. The mating of heavy groove riffs and berserk Japanese PSF-style free-rock energy keeps the deal anchored and ballistic. These guys could gig with damn near anyone “in the culture” and come out with new fans. Their new record’s called Mysterioso?. Only problem? It’s too short. 35 minutes just ain’t enuff of the good stuff.

Can’t say enough good things about the tone of the event, nary a harsh word from anyone. Woodstock ’69? Dude, you shoulda been at Emissions ’02. Added Bonus: The Ice Cream Truck! Yeah, frozen treats right outside the door. One of the few functional pictures I took (well, my wife: I fucked up all of mine) is of a couple people “at the truck.” Plus I saw one Canadian who refused to leave the club all weekend eat two huge cones, get into a laughing fit (Canadians, they love their humour), and blow ice cream out his nose! Fucking spectacular! But it was the recovery… He “Canuckled it”** up to the bar and bought a shot of Jägermeister. Goddamn Canadians, champs one and all. So the pics you see were taken by El Danno, so now you know the funny story about my first born’s name. El Danno Regala… Well, at least his name ain’t Sue…

The lone British band, the last up of the event, the tallest singer, and the biggest reputation awards all went to Orange Goblin. They came out and kicked ass. Thing was, the preceding band, Alabama Thunderpussy, came out and kicked ass, too. Luckily in a slightly different, Southern-tinged style. One who’d give a shit about a Motörhead/Nashville Pussy show woulda dug the fug outta this. The Goblin strapped on the roaring punk-metal feedbag and went to town, what with singer Ben Ward howling “Do you want some ‘eavy meddle?” and throwing the horns, hailing Valhalla, grimacing, roaring and generally looking like the 6’5″ 272 lb. Hägar the Horrible he is. Kudos to his sleeveless jean jacket with a million patches and Slayer written in magic marker on the bottom panel. Make of it what you will, but the last tune played at the Emissions festival was by Goblin plus assorted buddies hauling ass through the Misfits’ “We Bite.”

Why them? Style, substance, sound, and sex. They have little of the retro-feel many who gig “stoner rock” do, they can be pushed as a current thing, ’cause they are. They could play with Korn, Rollins, or Soulfly and get over. They’ve got a couple records and hundreds of gigs under their belt and are still bright-eyed and bushy-tailed. Articulate, bright, and grounded in what works and doesn’t, both musically and businesswise, they know the grind and how to deal with it. They are good-looking women who neither pander nor hide the fact. They just are. Their natural grace of getting a groove so often in so many different and often difficult circumstances and love of playing combine to make’m an authentic “thing.” They’re “real,” if you will.

That’s kinda how the whole event went. Bands came, they beat ass, they stayed and mingled, watched other bands beat ass, sold some stuff, and moved on. Hope to see a few of you next year.

* Lollipop‘s other guy there; his wife’s 6’3″, her reach really is Lennox Lewisesque.

** A specific way of walking to the bar, leisurely but goal-oriented, even when cross-eyed drunk. 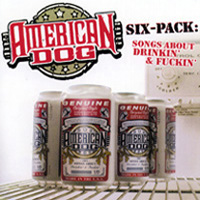