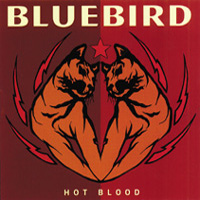 Straight-up rock record this time around. As long as your straight-up contains Trail Of Dead, Love Battery, Hitting Birth, early Smashing Pumpkins, and other worthies that don’t heft as metal or splat as punk. Yeah, I could see these guys doing ok on lotsa different bills as long as the audience weren’t dickheaded, like, say, Tool’s were when they booed Tomahawk. The promo on this is accurate, too. They mention cool stuff that belongs with this on the “CDR for my girlfriend so I have something to play in car” mix, like, Queens of the Stone Age, Swervedriver, Wool, Jane’s Addiction, and Drive Like Jehu. The same amount of wiggley guitaring, loose rock groove cut by chipped chords and vocal melody vs. yelling as you’d expect out of that CDR. It does have an awfully clean sound which cuts down on its traction; need some grit for traction, ya know? Be cool for the airwaves, but I don’t hear “that song.” A couple come close enough that with 50 grand in “promotion,” Bluebird could register. Throw the first tune, “Falling Back to Earth” to your older alt.rock brother and he’ll buy you a burrito.
(PO Box 14041 Santa Barbara, CA 93107) 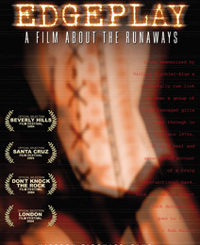 Edgeplay – A Film about The Runaways – Review 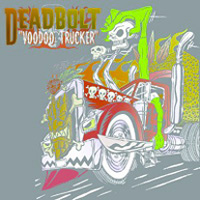