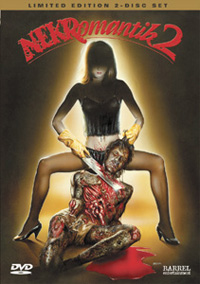 I’m in trouble. If I wasn’t going to Hell as of a couple of days ago, now I’m surely going and it’s all Barrel Entertainment’s fault. They were kind enough to send a couple of DVDs for review, but they were both soul-damning viewing experiences. You know, the kind of films that you know you shouldn’t be watching but you just can’t shut off. You wade through each grotesque or sexually-perverted sight with the hope that those images don’t burn permanent scars in the retina of your imagination.

The first film is a limited-edition two-disc set entitled Nekromantik 2 directed by Jorg Buttgereit. This is a very naughty sequel to the equally-appalling Nekromantik. In fact, part two picks up with the conclusion of part one in which sexually-frustrated Rob masturbates by stabbing the life out of his penis with a butcher knife. Rob dies, is buried, and is then dug up by Monika who is looking for some dead nookie. She becomes rather inventive in her putrid corpse lovemaking, but soon the adventure runs thin. Monika meets a live guy named Mark who’s also looking for a new relationship. What he doesn’t bargain for is that Monika would probably rather have him dead in bed. A very bizarre film that has plenty of sights you’ve never seen before.

If you’re a fan of the movie, you owe it to yourself to pick up this DVD package because it’s limited to only 20,000 units. The amount of extras is staggering. You also get a running audio commentary, behind-the-scenes footage, short films, outtake reels, tons of photos, trailers, liner notes, and more. A quality addition is that disc two is the complete soundtrack for both Nekromantik and Nekromantik 2. This collection has all the makings of a rare cult collectible. 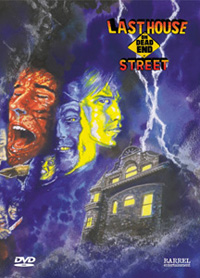 Another doozy of a cult collectible will no doubt be the DVD package for Last House on Dead End Street. This two-disc set is jammed with extras as well, and it also comes with a 34-page booklet. Last House on Dead End Street is another film that few companies would dare to touch. But Barrel Entertainment was brave enough to jump all over it and do it up properly. This infamous 1972 shocker was directed by Roger Watkins and was edited down from a three-hour print entitled The Cuckoo Clocks of Hell. But don’t worry; the final hour and eighteen minute print that became Last House… is still full of enough intense imagery to fuel plenty of night sweats. The main character is Terry Hawkins, a drug-dealing pimp who’s now out of jail and looking to piss off society once more. He wants to commit his new sadistic ideas to film, so he assembles a camera crew full of equally-depraved loonies. I realize that these people are all actors, but they must really be sick bastards in real life to do so eagerly what was done in this film. Anyway, his crew consists of two prostitutes and a couple male losers; one of which had been put away for screwing a dead cow. Terry’s first feature involves luring a blind man to some kind of stabbing death. With this bit of footage, Terry attracts some film connections who inadvertently wind up as stars in another snuff film. Each person is tortured on film and then killed. Roll credits.

This is one seedy film. The style has real grunge to it, and the images and sounds are literally splashed out. This is the kind of film that sticks with you for a few days no matter how hard you scrub. One brutal scene has a female victim tied to a makeshift operating table. The psycho film crew then dress as surgeons and proceeds to dissect the poor woman as she belts out some bloodcurdlers. They begin by slowly slashing every inch of her face and neck and then they move to hacksawing her leg. At one point, she passes out, and when they awaken her with smelling salts, she’s missing both her legs and an arm. She continues to scream, as the next move is a pair of shears to her stomach which churn out her intestinal tract. She finally gives up the ghost. This scene is a real downer and is truly frightening. Another outrageous moment is when a male victim is held down as one of the prostitutes extends a torn-off calf foot through her jean’s fly like a twisted penis. The poor sap is then forced to perform oral sex on the dirty limb. Sick stuff to be sure, so buyers beware… this is not for lightweights. On the bright side, this DVD comes with perhaps the most extras I’ve ever seen. You get the booklet, running audio commentary with the director and horror expert Chas. Balun (great stuff!), 20 minutes of rare outtakes, a 60-minute radio interview, 70-minutes of behind the scenes production phone calls, the trailer, guest appearances on the Joe Franklin Show, stills, a tribute by Necrophagia directed by Jim Van Bebber, and more!
(www.barrel-entertainment.com) 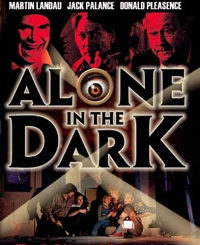 Alone in the Dark – Review