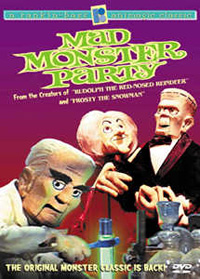 Many people have never heard of Mad Monster Party, and they don’t realize what they’re missing. I grew up in the pre-VCR, pre-cable TV days when you’d better know the TV Guide or “fuhgeddaboudit.” I would’ve rather had my ass kicked every day for a month than miss the once-a-year showing of Rudolph the Red-Nosed Reindeer. All of those stop-motion holiday classics were required viewing. Two of my favorite ’70s celebrities were Ozzy Osbourne and Bumble the Snow Monster. Somewhere back in the day I caught some quick glimpses of a show with the same type of animation but starring the likes of Dracula and the Wolf Man. I always wanted to see it, but never did. A few years back, I learned the evasive show was in fact Mad Monster Party and I got my paws on a cruddy quality bootleg. This feature-length, highly-entertaining goof show then went on my list of obscure titles that some company should jump on for a remastered release. Anchor Bay has stepped up and put out a great little package. I’m shocked at how clean the picture quality is, because Mad Monster Party just seems like one of those Saturday morning cartoons shot on cheesecloth.

Along with the crisp, 95-minute full-frame feature you get a few extras. There is a production art gallery, a great theatrical trailer, a poster and still gallery, and an Easter egg with rare trailers for The Wacky World of Mother Goose and Daydreamer. Another great bonus is a 24-page booklet with tons of photos and liner notes by a Rankin/Bass historian. The feature itself features the vocal talents of Phyllis Diller and Boris Karloff as Baron Von Frankenstein. The story is about a massive celebration given by the Baron on his Isle of Evil. The guest list includes everyone from the Hunchback to the Invisible Man to the Baron’s super-nerd nephew, Felix. It seems that the Baron wants to retire as leader of the monsters and he wants klutzy Felix to take his place. All manner of hijinks ensues and there is a surprise appearance by King Kong. Toss in some hilarious retro music and performances and you have a true classic.
(www.anchorbayentertainment.com)

The Hills Have Eyes – Review