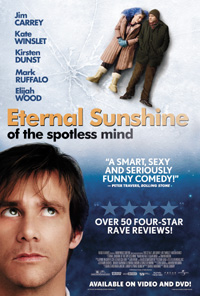 Eternal Sunshine of the Spotless Mind

The ’70s are often regarded (not without good reason) as the Golden Age of “daring” in mainstream film. All the rule-breaking of the European (particularly French and Italian) New Wave, all the loosening of taboos, all the experimentation of the Baby Boom’s youth matured and grew into a decade full of films like The Godfather, One Flew Over The Cuckoo’s Nest, Taxi Driver, Chinatown… You get the idea.

So what? Well, the encyclopedic geek culture brought on by the advent of video finally bore fruit with a less pervasive, but no less amazing, next wave. Pulp Fiction was arguably the opening shot, and we’re now getting into a time where one of the biggest stars in the world (Jim Carrey, in this case) can take on a completely fucked up film like Eternal Sunshine of the Spotless Mind, and no one finds it odd.

This isn’t to say that Sunshine is not, in itself, odd, because it is. Extremely. Essentially one long, feverish, emotionally-draining dream sequence bookended by quick shots of the real world, Sunshine is possibly the most disorienting film ever to show in multiplexes. That the film did as well as it did is heartening.

A quick rundown: Carrey plays a guy who just got dumped by his girlfriend (Kate Winslet). Turns out, she had him medically deleted from her memory, a revelation that inspires Carrey to do the same. The bulk of the film is what happens in Carrey’s sleeping brain as technicians zap his memories via computer. This is even trippier than it sounds, as the story careens from one bizarre sequence to the other, and not just in the dream state. The story of the technicians is every bit as out of control and reckless, and it is a testament to the sure-handed direction of Michel Gondry (best known for Björk videos such as “Human Behavior” and “Army of Me”) that you never lose sight of the plot, even as your tired brain is gasping for air.

Any further explanation would be pointless, as Sunshine is as much about the experience as it is the storyline. A film you can watch over and over, and still not catch everything. Excellent, and (hopefully) a harbinger of cinema to come.
(www.eternalsunshine.com) 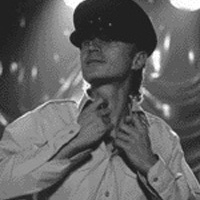