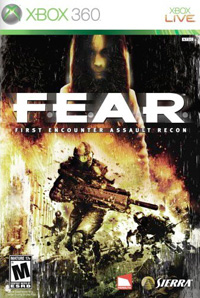 (Monolith/Sierra for the PC/XBox 360)
by Eric Chon

You know that visceral feeling you get when you’re in danger or afraid? The pounding heart, the sweaty palms, that heightened awareness? The feel of adrenaline coursing through your veins like an out-of-control river? So do the people at Monolith, and F.E.A.R. is the end-product to their distillation of the “fight or flight” product. Trust me, it’s an aptly named game.

Standing for First Encounter Assault Recon (yes, another hokey acronym), F.E.A.R. throws you into the shoes of an elite soldier trained to deal with the kind of fucked-up shit that every video game throws at you. Yes, you’re the only one with your unique abilities, and only you stand between between crisis and peace. It’s a “been there, done that” scenario that’s as old as the first-person shooter, but nobody plays these things for the story anyway (save, of course, Half-Life 1 & 2). It’s all about how pulse-pounding and sweat-inducing the action is, and F.E.A.R. brings the goods.

Terror never looked this sweet. Monolith has created, quite possibly, the best-looking shooter yet. And considering the competition, this is high praise indeed. But it’s not the incredibly detailed models or the realistic environments that push it over – Doom 3 wins that by a razor’s edge – it’s the reaction to the barrage of death that you and your opponents will dish out numerous times throughout the game.

When the bullets fly, F.E.A.R.‘s amazing physics engine will kick into high-gear. Walls will explode into fragments, boxes will scatter, and sparks shoot out like fireworks. Enemies come crawling out of the woodwork, laying siege and working together to bring you down. It’s pure chaos on the screen, and nothing since Max Payne has looked this hectic and beautiful at the same time. I found myself replaying scenes over and over, just to see how far I could take it!

And, much like Max Payne, F.E.A.R. has a cool little feature that allows you to slow down the carnage – much like the aforementioned game’s “bullet time” feature – giving you the upper hand in pitched gun battles. Not to mention that it looks fucking cool. No other game can match the cinematic feel that F.E.A.R. achieves.

But there’s always a downside, as no game is ever perfect. While F.E.A.R. delivers where it counts, the game gets quite repetitive after the first few areas. You’ll encounter many of the same enemies again and again, and often in the same locales (office cubicles, sewers, etc.). It’s this lack of variety that blemishes an otherwise near-perfect adrenaline-junkie’s dream. Also, the fleeting moments of actual fear in the game are few and far between. Most of the time, the horror aspect takes a back seat to the heart-stopping action (some may consider this a bonus).

Make no mistake, though, F.E.A.R. is a beast of a game that rewards your twitch-skills with one of the most exciting experiences since the original Doom.
(www.whatisfear.com) 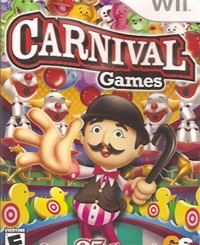 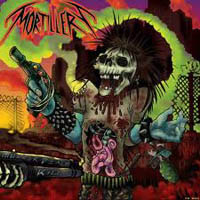