Jeff Buckley: Mystery White Boy Blues is about an artist as star-crossed as they come. Jeff Buckley may not have been destined for tragedy – or fame – but the reality of his lineage, ascent to selective fame, and untimely demise is really remarkable.

The book starts off with a little backstory. Jeff Buckley (who was known in his early years as “Scotty Moorhead,” a combination of his middle name and mother’s second husband’s surname) came into the world on November 17, 1966, scion of folk singer Tim Buckley and Mary Guibert. The elder Buckley, who died in 1975 at age 28, cast a huge shadow over Buckley’s early life and later musical career. And that shadow was often more a negative cloud than a positive hue. In fact, Buckley never really knew his dad, a troubadour’s troubadour, who pretty much flew the coup even before Buckley was born. So while having the Buckley name and literally being a doppelganger for his father certainly helped open a few doors, he was pretty much a self-made artist, doing all the gigging, starving, and soul-searching that most acts not named Brooke Hogan, Kelly Osbourne, or Sean Lennon have to go through. One poignant vignette in the text had a destitute Buckley remembering when he fantasized about stealing a pretzel in New York City.

He may have grown up all over California – much is made of his peripatetic wandering as a youngster – but New York would be where he would make his mark. In truth, Buckley played a game of bicoastal tag between Los Angeles and New York until he finally established roots – roots for a frequent traveler like him – in the Big Apple. At first, he spent some time playing with Gary Lucas and his band Gods and Monsters; but it was an odd pairing not meant to last. Next he established himself as a regular guitar-and-song man at Sin-é, a now-defunct semi-legendary coffeehouse/beer joint in New York’s East Village. While playing mostly covers, this is where he honed his singing and guitar chops. It’s also where he learned how to work an audience. Though he would play many of the early-’90s New York City venues, it was at the unconventional Sin-é where he was discovered by Columbia Records A&R man Steve Berkowitz.

I’ll admit to not liking his music much, but a lot is to be said for the cult following he had both in life and in death. Jeff Buckley must’ve been doing something right. He did suffer, from a marketing standpoint at least, from a lack of categorization, which in my book is usually a good thing (unless you’re like a few bands I could name but won’t, acts so piss-poor they actually defy categorization). He didn’t sell a ton of records – by major label standards – but he was a critical darling, particularly in the U.K.

The book details his fateful way of assembling a band after getting signed, and the subsequent recording of Grace and newfound musical camaraderie with likeminded players Mick Grondahl and Matt Johnson. Later, at the end of the Grace recording sessions, second guitarist Michael Tighe joined the band, and the three were affectionately nicknamed the Three Ms. But things didn’t go smoothly when the time came to follow up Grace, as Buckley lacked a clear musical direction: He and the band were all over the place (an eclectic sort, Buckley favored Led Zeppelin, the MC5, and Nusrat Fateh Ali Khan as much as Miles Davis, Nina Simone, and Leonard Cohen). Also complicating matters was his choice of producers. He went from mega-producer Andy Wallace (Nirvana, Beastie Boys, Aerosmith), to nervy punk legend Tom Verlaine of Television. After some disappointing sessions with Verlaine, he decided to go back to Wallace again. Apparently, Buckley finally found some musical direction, but he never got a chance to put it on record. On the night of May 29, 1997, literally on the eve of setting up sessions to rehearse the new album, Buckley went for a night swim in Memphis’ Wolf River Harbor and, aided by his own exhaustion and a sea of waves made from a passing barge, he drowned. Jeff Buckley was 30.

The fact that Buckley and his lookalike father were both wandering minstrels and, aside from a few days when the boy was eight, never spent much time together, it’s a remarkably tragic story how they both died so young without knowing each other. But unlike the father, whose star had seemingly dimmed, Buckley was on the upswing, or at least poised to keep growing as an artist. But it wasn’t to be. Don’t cry for Jeff Buckley though, he packed a lot of life in those 30 years and left a musical legacy that is still touted today. And that’s more than most of us will ever achieve.
(www.plexusbooks.com) 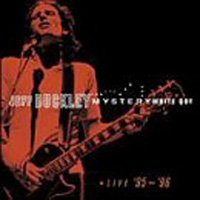