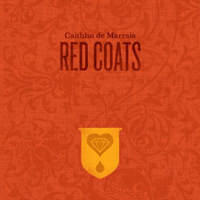 Caithlin De Marrais, who made her name fronting Rainer Maria, a popular mid-’90s/mid-’00s band who were considered emo before the ridiculously-named genre crapped out, has released Red Coats, her second solo record. (Though anyone familiar with the original article – Rites of Spring, Cap’n Jazz, even little-known late-’90s Richmond, VA, band the Exploder, will make you see just how elastic that appellation really is and continues to be.)

One thing that’s immediately apparent: This ain’t the same old Caithlin from Rainer Maria, or at least not the one I’ve heard. Red Coats is highly polished, electro music. Yes, it’s still confessional, but this time without the soaring emotional slabs which at least some of Rainer Maria’s music was known for; and it manages to be dancy without being dance music. Another thing, her voice is front and center and used as an instrument as much as any of the blips, drum loops, beats, keys, synthetics, etc. They turned it up so loud in the mix that you can hear every nuance; with a voice as quiet as hers, this was needed.

“Lovers Light” should be spanked, really, as the opening snippet is a close cousin to The Who’s “Baba O’Riley.” Despite the tease, you learn real quick that wailing Gibsons and ballsy machismo are about as far from Red Coats as possible.

I’m sure she’s already sick of hearing it, but on “Rose Wallpaper,” De Marrais comes off as the best Suzanne Vega impersonator this side of… well, someone who actually impersonates Ms. Vega. And damn if she doesn’t sound like her on the next number, “Belong,” either. “Hot Day” is an in-the-moment torch song that comes as close to swinging as Red Coats gets.

This is futuristic, ethereal, sleepy-time music. “Fizzy Wawa,” a short instrumental, features subaquatic whale-sounding peals. It reminds one of a weird, European short film, though one you can’t place, maybe one that doesn’t exist yet or never will. It’s evocative – and open-ended, like much of Red Coats. “City Girl” also sounds a bit subaquatic, and all this sub business makes sense, as the album was recorded in Saltlands Studio, a subterranean recording facility in Brooklyn, NY. Apparently, it’s quite the swinging scene (www.saltlands.com).

A neat thing about this record is that “Fizzy Wawa” kicks off a series of three successive augured songs, as “Fizzy Wawa” portends “City Girl,” which contains shades of “Sorry.” In fact, this tripartite sounds likes it was produced by Daniel Lanois, which may say more about these songs than anything I can write.

This is a strange, tidy, pretty little record and not a bad sophomore effort.
(www.endup.org) 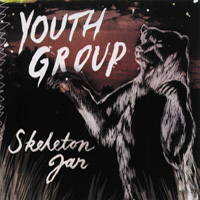