A Day To Remember (ADTR) are pleased to announce the brand new SELF HELP Festival this morning.  The show will be held on March 22nd at the NOS Event Center in San Bernardino, CA.

The SELF HELP Festival will be an all day event featuring A Day To Remember, Bring Me The Horizon, Of Mice & Men, The Story So Far, Memphis May Fire, Attila, The Word Alive, Stick To Your Guns, Issues, letlive, Terror, A Skylit Drive, Hands Like Houses, Hundredth, Beartooth & Rotting Out.  Many of the performers were hand picked by ADTR.

ADTR Lead singer Jeremy McKinnon commented on why the band chose to launch a festival now: “It actually came from a conversation I was having with my girlfriend and Josh’s about what it’s like to be in the crowd at one of our shows. She told me that most people who come respond like its more than just a concert to them. It’s like the music is genuinely helping them.

We were all throwing around ideas for a name that would mean something for not only our fans but for this genre of music as a whole, and I told the guys this story. It made us actually stop and think about what we really do see from the fans, and that’s 90% of the time that this music from most of the bands involved in this style of music makes them feel better about being alive. Thus we titled our festival Self Help, because at the end of the day, that’s what music’s all about.”

A Day to Remember’s latest album Common Courtesy has already sold over 116,249 copies to date and is the fastest selling album of their career so far.

Since their formation in 2003, Ocala, Florida’s A Day To Remember have grown from a small band with a dedicated local fan-base into a worldwide phenomenon, gaining the respect and adoration from their peers as much as their fans. This hasn’t been an overnight success story – A Day To Remember have worked hard to win over every fan they’ve made. Over the course of the bands career, the band has sold out entire continental tours, landed two Top 25 Billboard debuts and topped the Billboard Indie Albums Chart. 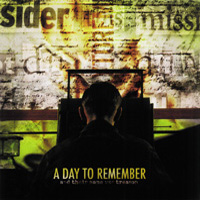 A Day To Remember – And Their Name Was Treason – Review

A Day to Remember throws a “House Party” – News