Desideratum is the forthcoming new long player from UK extreme metal misfits, Anaal Nathrakh. Applauded for consistently levying, “their own special breed of terrifying, mixing up grindcore speediness with giant choruses and riffs that are the audible equivalent of total nuclear annihilation,” by Metal Injection and crowned, “one of the most utterly fearsome and inventive outfits currently operating in the modern extreme metal scene,” and “aural devastators” by Decibel Magazine, Desideratum takes the definition of the word “extreme” to an entirely new realm of chaos.

Revolver Magazine offers up a stream of Desideratum in its sinister entirety. Get devastated at THIS LOCATION.

Anaal Nathrakh – guitarist/bassist/programmer Mick Kenney alongside vocalist David Hunt AKA V.I.T.R.I.O.L. – replicates the sounds of true evil. With both screaming banshee tirades and traditional vocals set against an dense wall of controlled chaos, what Anaal Nathrakh manifests is wholly petrifying yet inexplicably inviting. Hallmarked by crushing musical dexterity, ingenuity and breadth, married with mercurial, intensely misanthropic and sharp intelligence, Anaal Nathrakh’s sound is infused with a palpable sense of menace that is virtually unmatched in the metal world. Desideratum was produced by Kenney, with vocals recorded at Necrodeath Studios in Birmingham, and music tracked and mixed at The Black Flamingo in Orange County, California.

“The snarling vocals of Dave Hunt are the focal point, with the war machine of unrelenting black metal/grind/pseudo-industrial blasts bringing up the rear. Anaal Nathrakh’s approach is no mercy ever, apparently.” – Noisey

“Anaal Nathrakh are mesmerized by chaos, whether it be from incoherent screaming or programmed drums that blur into a mess of seismic beats. Even more intriguing are the melodic components thrown into the chaos, like the occasional soaring chorus line or striking guitar lead.” – About.com

“Desideratum is a statement of malicious intent, a call-to-arms to rally the masses and bring forth armageddon. Anaal Nathrakh continue their brand of grinding merriment, sanity be damned, and they are taking your sorry ass with them. Submit, and revel in the insanity yet again.” – AngryMetalGuy

“Desideratum is Anaal Nathrakh once again throwing down the gauntlet against all the bands who would make a play at being pissed off. It is a calculated butchery of sound that still comes off as intensely raw, and people owe it to themselves to check it out – if only to make every band they considered ‘heavy’ before this seem like a bunch of sissies.” – NoCleanSinging 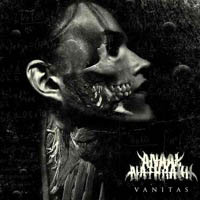