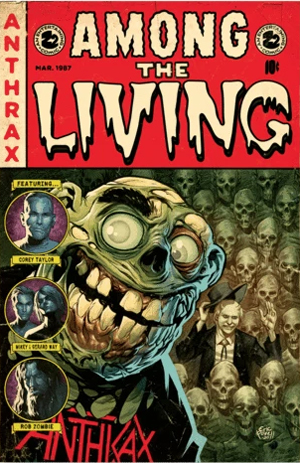 Anthrax’s Among The Living Graphic Novel out July 6

Since the first announcement of the upcoming graphic novel inspired by the titans of thrash metal’s landmark 1987 album, the project has remained one of the most anticipated releases of the year. Today, it is announced that the Among the Living graphic novel will be released in stores everywhere on July 6. In an effort to support the comic book specialty market, which had been hardest hit by the COVID-19 health crisis of the past year, Anthrax and Z2 shipped a surprise limited number of copies early that stores could make available for sale this week.
“I grew up with Marvel and DC, and they were part of my life from the time I was four or five years old,” said Anthrax’s Charlie Benante.  “My mom worked at Primrose Bakery on Tremont Avenue in New York, and when I’d go to work with her, I’d sit in the back with the bakers.  I’d read and draw the superheroes from the comics she would buy for me from this little shop just a couple of doors down.  I’ve loved everything about comic books and the neighborhood comic book stores ever since.”
The project pulls together a who’s who of names from around comics and music for a track-by-track storyline inspired by one of heavy metal’s most iconic albums, with all four members of the classic Anthrax lineup contributing.
An anthology narrated by longtime mascot “The Not Man” newly designed by Greg Nicotero (The Walking Dead) and written by Jimmy Palmiotti (Harley Quinn, Blondie: Against the Odds) and illustrated by classic Aliens artist Nelson; Among the Living unites band members Joey Belladonna, Frank Bello, Charlie Benante, and Scott Ian, with writers, artists, and other rock legends in a tribute to their landmark 1987 album, featuring covers by JG Jones, Eric Powell, and a preorder variant from Charlie Benante. Additional interior art and chapter breaks by Sawblade, Brian Ewing, and Josh Bernstein.
Scott Ian will contribute an original story inspired by the fan favorite anthem “I Am the Law,” featuring the legendary comic book antihero Judge Dredd, in partnership with 2000 AD. This will make official the decades-long connection between the character and the band, rewarding comic book fans and metalheads alike, and features art by longtime Dredd artist Chris Weston.
The full lineup can be found below:
1- Among the Living
Writer: Brian Posehn
Artist: Scott Koblish and Alladin Collar
2- Caught in a Mosh
Writer: Gerard and Mikey Way
Artist: Darick Robertson, Phillip Sevy, and Alladin Collar
3- I Am the Law (featuring Judge Dredd)
Writer: Scott Ian
Artist: Chris Weston and Alladin Collar
4- Efilnikufesin (N.F.L.)
Writer: Rick Remender and Joe Trohman
Artist: Roland Boschi and Dan Brown
5- A Skeleton in the Closet
Writer: Corey Taylor
Artist: Maan House 6- Indians
Writer: Grant Morrison
Artist: Freddie Williams II and Andrew Dalhouse7- One World
Writer: Frank Bello
Artist: Andy Belanger and Tatto Caballero
8- A.D.I./Horror of It All
Writer: Brian Azzarello
Artist: Dave Johnson 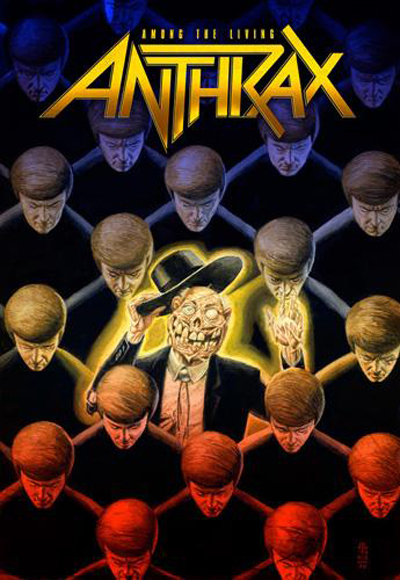 Anthrax’s landmark 1987 album influenced an entire generation of metalheads, cementing the New York band’s place in the Big 4 of Thrash alongside Metallica, Megadeth, and Slayer. The first in a string of certified-GOLD Anthrax albums amounting to millions of records sold in North America alone, Among the Living ranks high in “The 100 Greatest Metal Albums of All Time” (Rolling Stone), “The 50 Best Metal Albums of the Last 50 Years” (Metal Hammer), and “The 25 Greatest Thrash Metal Albums Ever (Kerrang!).” As recently as March 2020, Loudwire noted that the Decibel Hall of Fame inductee is “now widely regarded as one of the best thrash metal albums of all time.”
Check with your local comic shop for the availability of the standard TPB edition, with all editions available to order directly from Z2’s website now, with Charlie Benante’s Judge Dredd variant exclusive to preorders.
ABOUT ANTHRAX:  Twenty-twenty-one marks Anthrax’s 40th anniversary, during which time the band has released 11 studio albums, been awarded multiple Gold and Platinum certifications, six Grammy nominations, and a host of other accolades from the media, the music industry, and fans. In 1991, the band helped break down race and genre barriers when they collaborated with Public Enemy on the track “Bring The Noise,” and was the first metal band to have its music heard on Mars when NASA played “Got The Time” to wake up the Mars Rover in 2012.  Along with Metallica, Slayer, and Megadeth, Anthrax is a card-carrying member of The Big Four, the four bands that defined the speed/thrash/metal genre. Anthrax has also introduced a series now sold-out signature whiskeys and bourbons and partnered with the Stockholm-based NEZUMI Studios for a high-end, limited-edition Baleine dive watch. Twenty-twenty-one will see the release of Z2 Comics’ Among the Living graphic novel with a track-by-track storyline inspired by Anthrax’s iconic 1987 album, Among The Living.  The book pulls together a “who’s who” of names from the worlds of comics and music who created “bubble dialogue” and original artwork to express what the songs meant to them. Taking advantage of COVID-19’s prohibition of concert touring, the band has been hard at work writing the next Anthrax album.
ABOUT Z2 COMICS:  Z2 Comics is the premier destination for official music-related graphic novels, created in partnership with top-tier artists, musicians, directors, and pop-culture icons. Distributed globally via Simon & Schuster, Z2 has collaborated with such diverse artists as Blondie, Elvis Presley, Gorillaz, Machine Gun Kelly, Sublime, Yungblud, Cypress Hill, Babymetal, Major Lazer, Rico Nasty, and Paul Oakenfold, as well as debut comic works by Grammy-nominated artists Sturgill Simpson, Poppy, and Anthrax. Additionally, the company has tapped top talent for the official graphic biographies of such pop-culture legends as The Grateful Dead, Beethoven, and Charlie “Bird” Parker. In 2021, Z2 will publish graphic novel tie-ins to essential albums by The Doors, Ronnie James Dio, King Diamond, and All Time Low, with many more to be announced in the coming months.

We’re A Happy Family – A Tribute to Ramones – Review