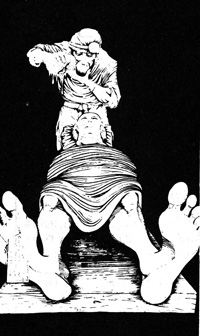 Aaahh… we’re back. Alive and spurtin’ in issue number two! I know y’all have been pacing the planet just waiting for the next category in the Academy Awards of Splatter Movies, so here it be. This time we have the nominations for The Ultimate Zombie Film!

1) Night of Living Dead (1968): No self-respecting zombie list would be complete without this ground-breaking horror film. Several budgetary limitations such as the use of black and white photography and the inclusion of a small troupe of unknown actors actually work in the film’s favor. The basic story is that a small handful of local survivors is held captive by hordes of the walking dead. Tension mounts until the film ends on an ironic note. Interestingly, no rationale is given for why the dead are attacking the living. No major gore accrues, but scenes of zombies gnawing flesh from bones and juggling intestines are admitedly graphic for their time.

2) Dawn of the Dead: Here we have the second intallment in Romero’s Dead trilogy. We begin with a full scale alert on how the zombie armies are taking over the major cities. A group of four renegades set out in a helicopter to look for safe ground. Unable to find any, they decide to take over and live in a giant mall. Many have touted this film as a social commentary on consumer society. I thought it was just a great frigging zombie extravaganza. You actually care about the characters, the effects are top-notch (Tom Savini), and the humorous elements all work. Highlights include an improvised screwdriver assault, a zombie pie-toss, a severed arm in the blood pressure machine, and a good ol’ gut-ripping finale. Yeah!!!

3) Day of the Dead: This is the last part of Romero’s Dead trilogy in which a military unit and a group of scientists reside underneath the zombie-infested cities. The soldiers are supposed to protect the doctors who are trying to find a way to control the undead’s cannibalistic uprising. The soldiers are arrogant bastards and tempers explode when they discover their dead friends were used to feed captive lab zombies. At this point, literally all hell breaks loose. There are numerous unsettling sights in this film which are shown in sharp “I dare you to watch” detail. Noteworthy moments include finger munching, jugular chewing, amputation, and subsequent cauterization, and another furious flesh-tearing finale.

4) Burial Ground: Here we have your basic Italian zombie munch-o-rama directed by Andrea Bianchi. As for a plot, a group of people gather in an old castle (good setting) in order to be eaten by walking rotten corpses (great F/X). These dead guys are funny as hell because their faces are decayed in such a way that you can’t distinguish one from another. You can choose your favorite, name him, and cheer for him as he grabs guts with gusto. One great scene involves a woman looking dreamily out the window. Several ghouls nail her hand to the wall and, with a classic Reaper scythe, decapitate her for the hungry zombies below. (Kinda like frat party beer funnels, eh?) Everyone dies, without a happy ending in sight.

5) The Beyond: One of Lucio Fulci’s best and bloodiest films. A woman (Katie MacColl) inherits an old hotel that unfortunately was built over an entrance to hell (must have been that annoying small print in the lease). In re-opening the building, she lets loose the spirits and zombies within. To hell with the story line – just sit back and watch some outrageously violent stuff. Highlights include tarantulas and melting pus-faces. There are also plenty of those atmospheric Italian zombies who amble about, radiating eeriness. Overall, you will remain entertained throughout.

6) Gates of Hell: Your humble (yeah, right!) Editor and I saw this fine feature at a very impressionable age. Definately not for the sqeamish, the story concerns a pale-mugged priest who hangs himself, thereby opening the titular gate to hell. Shortly after, zombie infestation runs rampant. Make sure you aren’t eating anything when you watch the scene where the girl in the truck begins bleeding from the eyes because you will loose your lasagna simultaneously as she looses her intestines, stomach, and a kidney or two. Other numbing effects include a slow, painful brain drilling with a rather large bit, and plenty of ghouls ripping handfuls of scalp and gray matter. Come to think of it, I don’t recommend eating before, during, or after this fine flick. All of my admiration goes to anyone who can explain the ending to me.

An honorable mention for stupidity’s sake alone is given to a new release known as Return of the Revenge of the Son of the Bride of the… Living Dead. Basically, a group of idiots got a hold of Romero’s original Night of the Living Dead, cut out the entire soundtrack, and then dubbed in their own dialogue and music, thereby creating an entirely different film. As much as I hate to admit it, I found myself laughing through almost the whole thing. Check it out.

This issue’s entries into the ongoing Sickest Scene Competition are:

4) The Cranial Milkshake from Bloodsucking Freaks (Directed by Joel M. Reed)
Psycho midget is thanked for a favor by being granted freedom with a captive woman. He gets to bolt her nude body to a chair and remove her teeth one by one with a pair of pliers. As if she wasn’t enjoying life enough, the “dentist” then shaves off all the hair on top of her head in order to make way for a huge power drill to burrow its way down through. Steady now, kids, because here comes a nice long straw down through the hole in order to suck up the chunky fluid. Yummm…

5) The Tarantula Torture from The Beyond (Directed by Lucio Fulci)
Our unfortunate victim stands high on a ladder in order to find a certain library book. The ladder falls back to the hard wood floor and the guy lies there in a semiconscious state as we see several turantulas slowly approaching from out of nowhere. These furry love bugs finally reach the poor sap’s face where they proceed to bite off his lips, pull out his eye, and wriggle into his mouth to puncture his tongue. Uuurrgh…

6) The Ascending Decapitation from Deep Red (Directed by Dario Argento) Scene not seen in American Release.
The psychotic killer confronts our hero with a meat cleaver. Before she can plunge the death blow, her necklace gets caught in the gate of an elevator. Seeing the opportunity, the flailing vicitim hits the buttom and the elevator begins its ascension. We then see a close-up of jewelry slowly cutting the neck and the spewing forth of strangely colored liquid from the mouth. Now free of impediment, the bloody chain reaches the ceiling as the camera freezes on the protagonist’s reflection in a pool of blood. The credits roll… 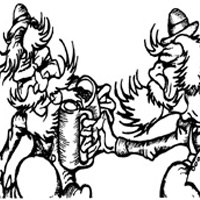 The Hills Have Eyes – Review

Four of the Apocalypse – Review