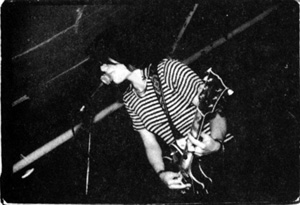 The release show at the Middle East drew quite an audience of older, predominantly female music appreciators. This was not a slam-your-head-against-the-wall show of wild young ‘uns lettin’ loose. This was a night of classy music played by well-respected musicians that, for the most part, were female.

Of the sixteen bands on the Curve of the Earth CD, about ten or so played. Had Malachite played, the earlier generalization of mature, reserved and appreciative audience participation might have been altered. The vibe of watch-only began to rock a little harder when Jennifer Trynin hit the stage and by the time the Sextiles went on, enough testosterone-brimming men had shown up to fill the room and rock the house.

The show started so damn early, we only caught what we caught. Here it is:

Tracy Bonham performed catchy and sing-songy songs that were girly and cute but began to get on your nerves with the politely timed “yelp” chorus. Her rhythm guitar was basic, but the band was tight.

During Velveteen, the crowd took somewhat of an interest and quieted down. Stronger guitar than Bonham, but the band was loose and lacking in stage power though they sounded well-rehearsed. Heavy keyboard filled in the guitar blanks and lent a bit of distinction to their sound (a la Stone Roses/Charolette’s Wheel). Musically familiar.

Jennifer Trynin played tight and fast. Jennifer (the person) broke into some funky riffs and strange chords with lots of distortion tricks. She’s got a low, strong voice void of girl-esk screeches and the male backup vocals certainly help round the sound. (Think Kim Gordon if she was ROCK.) Hell of a guitar player; she knew her instrument and sounded mature. This three piece band was the first to incite motion in the crowd. A straight, no frills stage presence, she just plain jammed!

Sextiles are a full male band with a female singer. They played hard and heavy and the crowd was right with ’em. The music was a direct contrast to the singer’s voice, which was ex-sques-ite-ly sweet, melodious and flowery even when she sang hard. Tight and polished with a real signature sound; they know how to cut up and get funky while staying together. Heavy percussion presented by one hell of a drummer and loud, loud, slap bass. Super eclectic sound, you don’t know how to HEAR ‘EM at first, and Noisy (with a capitol N). I’d personally buy anything they put out.

Grind. Before they play note one, one must appreciate the showy attire. The bass player (Mike, from the Heretix Hall of Fame) wore a garter-enhanced girdle with black stockings and upper body stocking, Glitter Doc’s matching the guitarist’s guitar! Really heavy three piece, grungy – to use that nasty word – loud, bashing yet crafted music. Well timed, with a moderate to fast tempo. (Not clean or intricate but powerful and catchy. A powerful if uncomplicated noise.) They played well together and pumped out the highest volume all night. Grind breaks all girlie cliches with a complete lack of passive cuteness and just grabs the audience and shakes the living shit out of ’em. With chemistry aplenty, they kept their heads down and evicted all the sound they could from their instruments. Lyrically light and un-ear-taxing. (Think brick wall. Now think slamming up against it repeatedly.) You could feel Grind in your stomach. Deserving of the headliner’s slot. 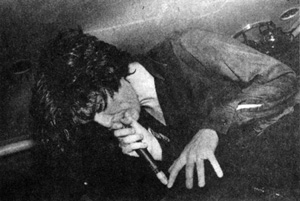