with Overdose, Skrew at the Rat
by Chaz Thorndike

Sick as a dog but I wouldn’t miss this show even if I was dead. This is like seeing Sepultura Jr., Tree Sr., and Ministry Jr. Actually, I did try to weasel out, but the Editor was sicker than I was, and his sympathy was along the lines of, “Stop whining and go to the show, you pansy. You back out and I’ll shut you off.” Click. So I went.

Wow! Yeah, all right, so it’s not often that I am completely wrong about a band, but I was way off mark here. Hardcore takes many shapes, sounds and styles these days, and I sold these guys way short. The Spudmonsters put on one of the bounciest, most energetic shows I’ve ever seen. From the re-release of Stop the Madness (Massacre), I knew they were heavy, had screaming solos, non-stop hardcore bashings and a rough-throated rant-a-thon singer who never shut up. It sounded like the hardcore that grew out of a dying thrash metal scene. Wrong. The Spudmonsters are true party hardcore. Tough-lookin’ guys with no hair and lots of tattoos; when they started wailing, the pogoing and skater leaps started and the tuff scowls turned into the big goofy grins of a band who love what they do. And boy, they do it fast! They caught a stomping groove that wasn’t angst-ridden stomp-yer-boots-on-the-ground; it was let’s-leap-around-a-lot. The lead guitarist did some fretboard flying (jeez, nobody solos anymore) and some wild twist-and-shout thing during the rhythm parts. With the exception of one soliloquy, there was no between-song banter; they never let up or slowed down (sounds like a lite beer commercial). Like the newer material from Boston hardcore faves, Tree, the Spudmonsters pump out some of the fastest hardcore heard in quite some time. 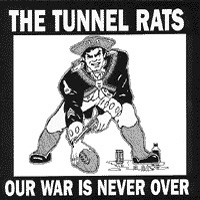 The Tunnel Rats – Our War is Never Over – Review