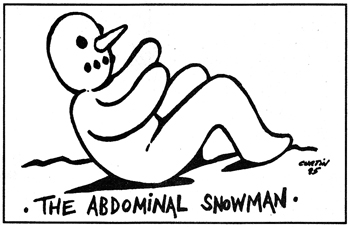 The laws of probability clearly indicate that if both the husband and wife of a couple like both the husband and wife of another couple, their kids are certain to despise each other. My parents couldn’t believe their good fortune at having a set of friends both of whom they liked and both of whom liked them. The aggression between “les enfants” was simply a write-off.

Tommy hated me with a passion, but that was okay because I would have been pleased to watch him simmering in hot oil. He was a total weenie, simpering and shrinking at the slightest provocation, but he over-compensated for this, his true nature, by having occasional outbursts of belligerence and showing off.

When we were 12, we were forcibly dragged on a ski weekend with the folks to Vermont, the most protracted period of torture I had yet to endure. I was studiously defiant at the time, and had developed the teeth, fingernails and lungs to back up my arguments, so I occasionally got my way. I was damned if I was going to make things easy for my jailkeepers, so I refused to go skiing. Perhaps to taunt me or more likely just because he was such a wus, Tommy begged off too. When I heard he would be staying in the cabin, I almost relented to going to the slopes, but I had too much pride to reverse my position.

The second the front door closed behind our parents, Tommy turned to me and whined, “Now what are we going to do?”

“We?!” I asked incredulously, “Whadd you mean we, you little weiner? I’m not here to entertain you! What were you planning on doing when you said you were staying? Run along now and do it – leave me alone!”

“I thought you had an idea when you said you were staying!”

“I did!” I lied, “But not for you!” I was putting on my boots and strapping myself into multiple sweaters, vests and jackets, anticipating a long cold afternoon of evading this creep.

“Who the fuck cares,” I spat, as I tromped toward the back door.

Tommy frantically grabbed his jacket, pulled on a boot and, struggling to get the other one on, stumbled behind me. I almost managed to slam the back door in his face as I went out, but he stuck his half-shod foot in the opening, whimpering lamely when the door hit it.

I strode through the snow as best as I could, with him limping along behind.
“Where are you going?!” he kept hollering. I ignored him.

He finally got his clothing adjusted, which, I guess, gave him a burst of energy, sending him into show-off mode. He took off at high speed, running by me to leap up and grab a tree limb which crossed over the path, swinging his stubby legs in my face. I gave him a swat and kept going.

He did this a few more times, each time dropping off the tree after I passed, then running ahead of me to block my way as he latched onto another limb. God, was he annoying.

We came to the bank of a river, and Tommy swung off a tree that hung over the ice, landing in a heap in front of me with a big dumb grin on his face.

“You’re such an idiot,” I said as I brushed by him. The ice was pretty slick, but I found my footing quickly, getting enough traction to run a few paces and then slide a good distance. I assumed Tommy was too much of a fool to figure out how to do this, ‘cuz he never caught up. I heard him yelling after me for a while, but then I guess I got out of range.

After about half an hour, I began to get cold, and I was suspicious of Tommy’s having left me alone for this long, so I turned back.

As I approached the bank where I’d descended onto the river, I saw Tommy was still where he’d landed on the way down; as I got closer, I saw that he still had that big dumb grin on his face. Only now his lips were blue and his face was ashen.

“Jesus Christ, you asshole,” I hollered, but then I saw that his legs were under the ice and there was water rushing around his thighs.

Fuck. Now I was scared.

“Tommy!” He didn’t move. I crept around the ice to stand as close as I could without getting sucked in myself. I grabbed his arms; one of his little blue hands banged against my cheek and felt no less cold than a chunk of ice or a snowball. I managed to drag him to shore and kind of sling him over my shoulder, his hands flopping in my face as I pulled him along. God, what an idiot; he hadn’t even grabbed his gloves in his zeal to chase after me.

His little hands were so blue and pathetic that I was afraid one of his fingers would crack off against the branches that kept snapping against us. I took a couple of his fingers in my mouth and sucked on them hard, thinking, I suppose, that the harder I sucked the warmer they’d get. I shoved his other hand under my jacket.

We weren’t far from the house but it was slow going, and even though I was freezing I’d started to sweat. As soon as his little fingers in my mouth started to get warmer, I took that hand and stuffed it under my sweater against my skin, and took the fingers of his other hand into my mouth. Good, now his hand was just cold, but not frozen and brittle. His damp, stubby fingers were brushing against my pubescent breasts, and my nipples were hard as pebbles, although I’m sure I didn’t know whether it was from cold or what. A little further on, I switched his hands again, and I could taste the saltiness of my sweat on his damp little fingers.

When we finally got back to the house, I dragged Tommy to the wood-burning stove, which was still kind of warm from the morning’s fire. I laid him down in front of it and smacked him on the face a few times, but he was still out, COLD. I put a log in the stove and started to peel off his frozen clothing. When I got his pants off I almost freaked out at the mottled, bluish quality of the skin on his legs. His dick touched my cheek and it was like a little frozen sausage; I yelled, “TOMMY!” at him really loud, but he didn’t move and I lunged on his dick with my mouth. It was really cold but it started to warm up pretty quick. I sat up and yanked off my coat and all my sweaters in one fell swoop, then covered his legs with my bare torso, rubbing my nipples against his ugly, scarred and scabby knees; then I sucked his dick back into my mouth. It had gotten softer and warmer, but now it was starting to get hard again. I tried to watch his face while I sucked on it, ‘cuz I sure didn’t want him to wake up now. But his little weenie was waking up fast; it was twice the size it had been when I started. I swear I could feel the blood pulsing through it against my tongue. He started to squirm a bit and I froze. Oh shit, I couldn’t let him wake up now. What was I gonna do?

I looked around frantically. Then I jumped up and grabbed him by the feet. When I’d dragged him as far as the back door, I gathered him up in my arms and yanked him over the threshhold. I managed to get him upright and then I pushed him face-first into the snow. I sat down on his little cold butt and then rubbed my budding breasts into his shoulder blades, pushing him further down into the drift. I pushed against him trying to keep my naked chest warm, but he wasn’t much warmer than the snow. My nipples were starting to freeze but I rubbed a handful of snow over them just to see how the rough texture would feel. Felt pretty good. After a few minutes, when I was satisfied he was refrozen, I got up and dragged him back inside by the stove.

I glommed onto his little dick again, sucking as hard as I could, even dragging my teeth over the ridge beneath the head of it a bit. It defrosted quicker this time and started to become quite a mouthful. His body began to squirm again, but this time I didn’t care – I had him. I grabbed the blue long winter underwear he’d been wearing and wound it around his wrists really tight, tying him to a leg of the stove. Then I went back to my business.

His eyes finally popped open, and as they did, he yanked on his binding, yelping, “Hey! What’re you…?!” But then I think he must have realized that he had nothing to complain about. His expression was kind of frantic, but he didn’t try to push me off or anything. His dick was really hard by now, and his body started to quiver. I saw a smile forming on his face, and I figured I’d better get ready, so I let go of his dick with my mouth, and just worked it hard with my hands. He was squirming and breathing really hard – good, I wasn’t going to be responsible for his death – so I took aim, and when his butt bounced off the floor, I gave the little shithead a really good taste of his own medicine. 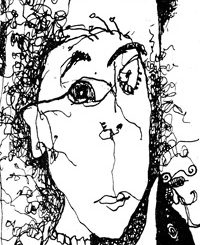 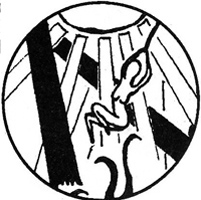 Always a Treat, but Nothing Special – Fiction