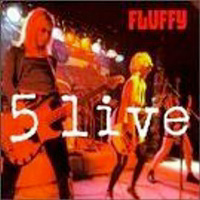 When you’ve been exiled in Limpville as long as I, you forget about copulative thrills and downsize your libidinal goals accordingly. It isn’t a joyless existence. The pleasures of impotence, though fewer and further between, are more subtle and less likely to produce itching sensations on the tender spots. Even mind’s-eye scenarios deserve G-ratings. Sloppy fantasies of rodeo-like intercourse with newswoman Connie Chung have given way to wishes for a shared pot of tea with that great lady. But the belly fire is not completely out. When I stumbled home from work recently to find Tim/Kerr records had sent me a photo of the four comely lasses in Fluffy and a copy of their CD EP Husband, I tingled with forgotten ecstasy, a remembered thrill akin to the ghost sensations felt by amputees, or the uncontrollable erections of neutered golden retrievers when they remember the good old days and shiver.

As the show was the same night, I grabbed a tape recorder, headed for the Crocodile Cafe, and tried to score an interview. I approached Angie Adams, drummer for the band, and asked about recording a Q&A. “I don’t know,” she said, and in three words I learned that, despite dressing like Cher, she spoke like a Masterpiece Theatre heroine. Fluffy was hesitant to do an interview. I would learn this was because they were agonizingly hungover after carousing in Canada. I met them in Seattle, the third stop in a North American tour which would conclude at New York City’s CBGB’s for the recording of a five-song live effort.

The four women were polite and distant, though they did warm up to the idea of an interview as their hangover medicine kicked in. All four members were present, but Amanda Rootes, vocalist/lead guitarist/songwriter, did all the talking. In addition to Rootes and Adams, Fluffy are: Bridget Jones on guitar and Helen Storer on bass. And yes, they are even more strikingly beautiful in person. 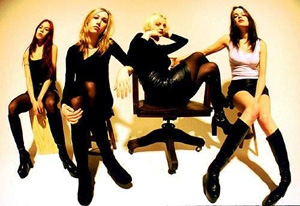 You’ve just finished two shows in Canada, and since Canadian beers are so much better than American beers, my first question is: Do you detest American beer?
No, I love Miller. We all love Miller. It’s our favorite beer. Genuine Draft cold-filtered Miller. That extra clean taste, it’s a dream. But last night we tried some boring ale from Canada and I just could not believe the pain this morning. It was shocking. Normally hangovers are quite funny, but today I just wanted to die.

Hangovers are funny?
Well yeah, usually. You know, you wake up and you’re on tour, and it’s 7:00 in the morning and your tour manager’s just rung, and you just lie in bed laughing ’cause it’s just so funny. You have to get up. It’s a really sick trip. I’m going to be sick and throw up and it’s quite funny, but today the pain was just extreme.

Did you drink a stronger ale last night or…
I don’t know. I reckon it was just really kind of dodgy.

Do you need a translator everywhere you go in America?
Yeah, we saw on this menu they have biscuits and gravy, and we’re going “biscuits and gravy?” In England, that means something really different from what it means here.

What does “Fluffy” mean?
We got it from this lesbian novel called Fluffy Butch. It’s about a woman who used to date men, but then she discovers women. We just took the name. I used to have this boyfriend, and he’d call us butch slags because we’d go out and party, and he didn’t like it. He didn’t like that we were in a band. We saw this postcard that said “Fluffy Butch,” we thought it’d be really funny to name our band after it to piss him off. It’s ironic ’cause we’re four girls and everyone expects us to play wet music, but that’s not what we play, it’s hard punk.

I take it you’re huge in England.
People are quite suspicious. In England, they don’t know about girls playing guitar or drums. They just can’t get their heads around it. Especially an all-girl band, you know, it’s such an unusual thing. Our last record sold quite well, and we do have fans there, but we’re not as big as Oasis.

Are you better received in America thus far?
People don’t come with their arms folded, saying, “So what are these four girls going to show us tonight?” They come with a much more open attitude like, “Okay, what are these girls about?” They take us much more seriously here. Last night, we played a gig in Vancouver, and after the gig a guy came up to me and said, “great lyrics!” That’s never happened to me before. For someone, especially a guy, to come and actually listen to my lyrics. We’re four girls, and every instant we have to be defensive. It’s very depressing. 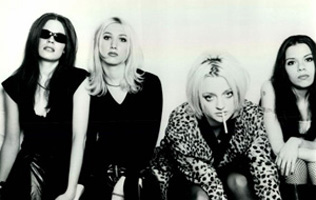 What do they say?
“Get your tits out.” “You’re shit.” “Can you only play bar chords?” We say, “Look, we’re a punk band and… fuck you!” We’ve had so many fights with guys after gigs. You sort of pin them to the wall going, “You fucking bastard!” [Amanda takes her right leg and kicks an imaginary limey lout in the groin.] We’ve gotten into many big fights with people ’cause they’re just so abusive.

Is that why you had armed guards to take you offstage?
No, that’s just because we don’t want to get into a Spinal Tap situation, you know, where you can’t find your way back to the dressing room. It’s very confusing, especially with these hangovers. We brought these really weird codeine tablets from Canada and we’re spaced out.

You could resell them and finance your whole tour.
They’re illegal here, aren’t they? [adopting a sinister voice.] “How much? You want to buy one? The first one’s free…” [cackles]

So you have an empowerment message for the women of England?
Yeah, definitely. This is just something we had to do. You know, we used to play in my living room and have boys outside going, “You guys are such a racket, you’re never going to get anywhere.” We wanted to do it to show that we can breach ourselves and make music. I think it’s the only thing we could’ve done really, or we’d all be dead. We were just going out and getting trashed every night and going nowhere really fast. The band gave us a reason to exist. We were living on no money, taking far too many drugs, and really being self-abusive. The band gave us something to do every Friday, something to look forward to.

The four of you have adopted a glamorous look. Do you foresee a time when you wouldn’t have to do that, or wouldn’t want to? How does that look fit into your philosophy?
It’s something that comes naturally to us now. We’re very into our glamour thing. We like dressing up. I think a lot of girls dress down and that makes life easier for them. They get taken more seriously. And maybe we just want to make our lives harder.

What does “Psycho Fudge” mean?
That song is about drugs, fudge for the brain, sweet nectar in your head. It fucks you up. Heroin and cocaine. I used to work the door at this club in London. The people are very rich, lots of artists like Damien Husk and Lucien Freud, and a lot of actors. They were taking so many drugs and really fucking themselves up, drinking champagne in this sort of bourgeois ideal. The song is about watching these people fuck themselves up with drugs and going nowhere fast.

You have a record out now on Tim/Kerr. When is another record going to come out?
We’ve got an album coming out on Enclave Records in August. 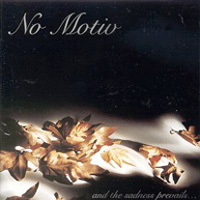 No Motiv – …And the Sadness Prevails – Interview 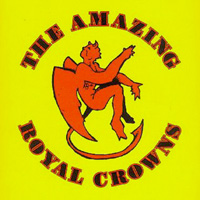 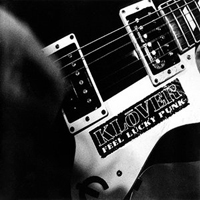