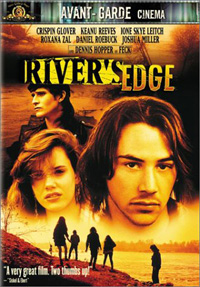 So I had the bright idea of tying the video section together with a unifying concept. After anguishing for hours, I thought I had a brilliant one: Modern Cinematic Updates of Shakespeare. Assigned one out, came back good, blah blah blah. I thought of doing Richard III but I never saw the first two and besides, people with bad posture bug me. So it came down to mere hours before press time, there’s a gaping 350-word hole on page 68, and I have to fill it with something that connects with MOPI in some way. I finally settled on River’s Edge. Simple enough on the surface: Both films feature the undeniable thespian talents of Keanu Reeves, a modern-day Olivier if ever there was one, and look, the word “river” even appears in the title. Yet upon reflection, distinct Bardic parallels emerge that are unmistakable. The classic themes are there: Death, duplicity, betrayal. (Never mind that even the average Adam Sandler movie has all of those elements these days – I’m on a roll here.) The brother-against-brother subplot smacks of that Shakespeare play with the two brothers in it. The murdered girl (I’d mention her name or the name of the actress who played her but I don’t feel like getting up and putting the tape on to find out) is as resonant a portrait of the fragility of femineity as Ophelia, except she didn’t drown and Ophelia didn’t spend all of Hamlet lying there naked – although imagine the surge in ticket sales at the BSC if she did. And is there a more poignant vision of star-crossed love then the romance between Dennis Hopper’s Feck and his inflatable doll, Ellie (oh, sure, I remember her name)? Well, yes, of course there is, but that’s beside the point. It hardly matters, particularly since River’s Edge has the tug of the greatest Elizabethan tragedy. And even if it doesn’t, who cares? At least I filled the damn space. I’m going to sleep now. 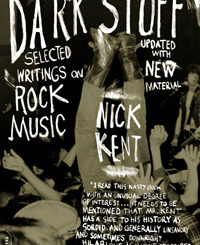