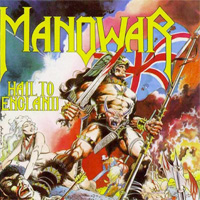 After 15 years, Manowar still cranks out over-the-top heavy metal. Filled with images of the glorious us and the they’ll-just-never-get-it them, song after song rips out of the speakers and unifies the outcasts under the banner of metal.

It’s been four years since The Triumph of Steel, what have you been doing?
We’ve been working on this album, making sure the songs were right. We worked with John Kalodner, the genius behind Whitesnake, Aerosmith, AC/DC, and on and on. We just wanted to take our time and do it right. We have a new guitar player who’s just a demon, and we’re ready to get on the road and kick some ass.

Where’d you meet Karl Logan, your new guitarist?
Met him at a Harley shop in Pennsylvania. He’s a brother biker, a brother of metal.

Not to backtrack, but isn’t four years kind of a long time to spend on an album?
It’s not that it took us four years to do the record, there were just four years between records. We toured for The Triumph of Steel for a good long time, and we re-released two of our earlier albums, Into Glory Ride and Hail to England. Then we toured again for that. So we really only worked on this album for two and a half years.

Hail to England sounds like a live record, but isn’t. How come you’ve never done a live album?
We just never did, that’s all. We’ve thought about it, and we’ll probably do it because there’s so much demand for it. 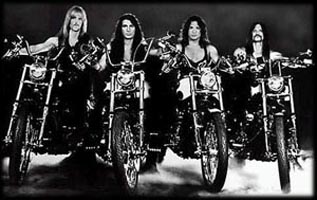 You use the word “metal” more, both in conversation and in your lyrics, than any band I can think of in years. You use it freely, openly, and proudly.
We have the right to use the word, while many others do not. They’re not playing metal, we are.

Kinda like Defenders of the Faith was for Judas Priest, only more so. Who do you tour with these days?
The same people we’ve played with throughout our whole career. We’ve not exactly been welcomed with open arms. We can find supporting acts, but other bands just haven’t wanted us to take the stage ahead of them.

How long has Manowar been going?
We’ve been doing this a while. This is our eighth record. Our first record was released in ’82, and we’re not going to stop any time soon. Our motto is still “Born to Rock, Drink, and Fuck.”

Do you have embroidered jacket patches with that on ’em?
No, but it’s on the back of our T-shirts.

You always have good shirts and covers.
Yeah, we believe in quality. We’ve been using the same cover artist since ’86, Ken Kelly. He’s done a lot of the Conan books, a lot of Tarzan, he’s done a lot of stuff.

You’ve been on four or five record labels over the years.
I think it’s been more like eight or nine. We have a vision of our music and what we want to do, and we won’t change. We believe in what we’re doing, and we believe in our fans too much to ever fuck them over. When people try to “suggest” that we change our style, we “suggest” that we leave.

Do you break contracts, or is it usually a mutual split?
Whatever. We just leave. We just do what we want. That’s the thing about the band, nobody tells us what to do. We’re fortunate that the music drives us on. We’ve got great fans and we just really believe in the energy of heavy metal – getting out there, getting away from the bullshit of everyday life, going into an arena, shutting off the lights, turning up the fuckin’ music, having a drink, let’s fuckin’ party! That’s the name of the game: energy.

Your energy is different from other’s, even in the metal genre. You’ve stuck with the roots of heavy metal, choosing not to experiment with offshoots by incorporating industrial, rap, hardcore, or punk.
Bands that stray get what they deserve. If you follow fashion, or jump on someone else’s bandwagon, you deserve to go down the toilet when they go down.

A band I’m surprised you never toured with is Armored Saint. In ’84/’85, I was really into March of the Saints and whatever their second album was.
I have a friend in Chicago that said they were nice people and a good band that tried to sound like us, but I never heard their stuff.

The singer, John Bush, is now in Anthrax.
Oh? That’s sad. I’m sorry to hear that.

You never got into the whole thrash thing?
Do you see where Anthrax’s career is today? But I would love to play with Metallica or any of those guys.

Where are you from originally?
New York.

From Hail to England and the timing of the whole British Invasion of metal, I always thought you were from England.
We pre-dated the British rush. Our first album was recorded in ’80, and came out in ’82. Iron Maiden started around the same time as us, but Judas Priest has had been around since the late ’70s.

What were the inspirations back then?
Sabbath, Mötorhead, Priest… The influences bands today claim.

Was Iron Maiden an influence?
Ugh. No. No way. I’ve never really thought much of them. They tried to portray themselves as the metal musician’s band, but it never struck me that way. I think they did a good job for their fans, and they believed in what they were doing, but I never got into them at all.

Who writes your lyrics?
Well, I write most of the lyrics, actually I write all the lyrics, but the thing about our song writing is that the band is a band.

How do the songs come together?
We think of the energy of the audience and the experience of heavy metal, how unique it is, and how incredible it is to love something that makes you an outcast, and you can be put down for it. It’s a special thing, it’s like being a part of a secret society, shunned by the rest.

I heard you did a wild video for “Return of the Warlord.”
It’s partying, Harleys, girls, bands, riding up on stage, just animal, it’s all out fun.

How many videos have you done?
Let’s see: “Gloves of Metal,” “Blow your Speakers,” “Metal Warriors,” the tour documentary “Secrets of Steel,” and this one.

Are you still getting support from previous labels?
Actually, there’s a big European campaign by Atlantic to promote the back catalog. They didn’t want to do it when we were on the label, but they want to do it now.

Over the years as metal has phased in and out of vogue, and even the word “metal” has come to mean everything from Mötley Crüe to Soundgarden to White Zombie, who do you see at your shows?
Our fans know what they’re going to get when they come to see our show. Fans that have been with us since the beginning are still there today, and every new album regenerates us and our fans are younger and younger. Like what’s happening with KISS; a whole new generation of people are digging their music. Faithful fans keep coming out to see us, and new fans keep coming in. 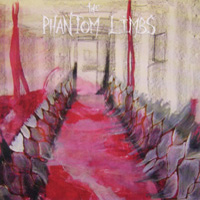 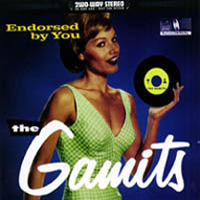 The Gamits – Endorsed By You – Review 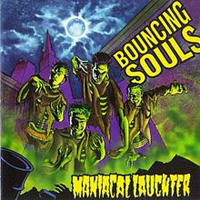