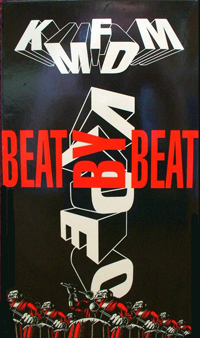 As I put in KMFDM‘s new video collection (entitled Beat by Beat), I kept one finger near the pause button and one near, well, near something else. No, I wasn’t waiting for footage of En Esch in fishnet stockings – although there’s plenty of that – I was hoping for some Nicole Blackman moments. If you don’t recognize the name, she generated a lot of hype for her spoken-word contributions on KMFDM’s Xtort CD and also for her opening stint while touring with them. In any case, Beat by Beat is an amalgamation of the Good, the Bad, and the Ugly. The Good is that they included all seven of their studio videos, “More & Faster,” “Money,” “Vogue,” “Juke Joint Jezebel,” “A Drug Against War,” “Son of a Gun,” and the previously unreleased “Naive.” “A Drug Against War” is one of the cooler offerings, featuring a storyline based around their numerous Brute-constructed album covers. “Juke Joint Jezebel” is also engaging, as it intersperses live footage with clips from a Manga film called Pat Labor 1.

The Bad is that they included non-performance footage from their ’94/’95 Beat By Beat and Angstfest tours, with such exciting moments as roadies setting up the stage and the standard attempts by band members to be spontaneously amusing because somebody aimed a video camera at them.

And finally, the Ugly. Although the live footage encompasses the massive crowds and KMFDM’s energetic stage antics, it also captures the band. Granted, the primary vocalists, Raymond Watts and Sascha, are a far cry from the Golem, but En Esch with his manly physique and bald cranium matched with fishnets and short shorts, is quite a peculiar spectacle. Fortunately, everything is seamlessly edited together with plenty of jump cuts, so it doesn’t get bogged down in prolix portions. After viewing this, I think it’s safe to say that KMFDM fans will still be fans, although Blackman enthusiasts will have to look elsewhere. 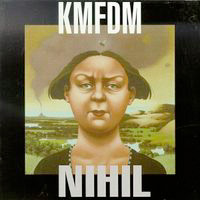 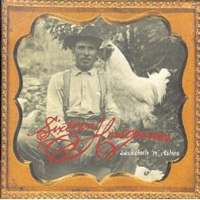 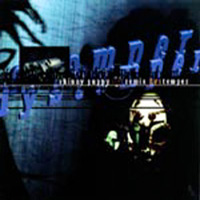