Spike and Mike aren’t pussyfooting around – “Please take a barf bag, the screen is to your right.” Veering from vomitous to hysterical (and sometimes both), Sick and Twisted offers enough raunchy sex, scatology, and sailor swearing for a millennium (or at least until the next festival). Unfortunately, the festival has way too much shit. Literally. Admittedly, I really don’t enjoy shitting, farting, or phlegming jokes. Even if I did, I think most of the gross-out shorts’ humor relied entirely on the embarrassment people feel about their bodily functions. “Tee-hee, that guy spit phlegm in that other guy’s mouth.” I may be in the prissy minority here, but I got over that inanity in the third grade.

You may have seen Sloaches Fun House, the “sickest film ever made,” advertised in the S&T ads. Well, it ain’t no Pink Flamingos (and it’s not as much fun, either). In the short, various slimy clay figures defecate and fornicate with each other while a voyeuristic audience watches. Wait! The audience is us? What depth! What profundity! I’ve made more interesting stories with mashed potato figures and ketchup. 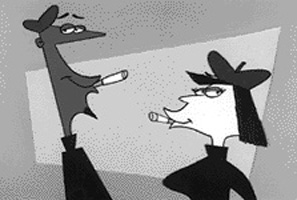 Moving on, I think I overdosed on the No Neck Joe cartoons. It involves the trials and tribulations of a short, pink fellow who is a neckless wonder. I saw, like, eight of them in a row (the other shorts are one apiece). Ever hear of “always leave them wanting more”? No Neck Joe isn’t even that funny; it’s merely cute.

Illusion of Life could very well have been the animator’s interpretation of the story of Timothy McVeigh’s life: a boy’s mother constantly shoots down her son’s attempts to make something of himself (at her son’s first outing as an acoustic guitar player, Mommy Dearest heckles, “You’ll never be as good as Hendrix!”) until he opens fire in a crowded church. As he is being strapped into the electric chair, his mother proudly whispers to a witness sitting next to her, “That’s my boy!” A single tear falls from his eye before the switch is pulled and he is fried into oblivion. Beautiful.

The festival even has a moment of self-referential humor. In Hut Sluts, one of the titular sluts tears an animation festival flyer off her car window and immediately tosses it, commenting, “Only freaks and losers go to those things.”

Brief comments about other shorts: Smoking, a beatnik-y little gem that seems to be glamorizing smoking until you meet the couple smoking with electric voiceboxes (I can’t remember what the guy said, but the woman’s head promptly falling off in response made me die laughing). In Little Rude Riding Hood, the Wolf eats Riding Hood. No, the other way. Ahem. Anyway, in Sea Slugs!, slugs go sailing through the ocean. The very salty ocean. You see what I mean. Dirty Birdy, an old favorite of mine, is in the vein of Wile E. Coyote and Pepe LePew cartoons: the same game over and over, just different ways of playing it. A poor cat-infatuated birdy tries to woo the feline of his dreams by showing her his bum; the kitty must think of inventive ways of getting the bird to piss off. Home, Honey, I’m High is Father Knows Best stoned. Hey, that’s my life story!

Two of the shorts parodied Saturday-morning anime with on-purpose bad dubbing (“You will not win, Fast Driver, because I am the best and I will win, what do you think of that, Fast Driver, hmmm?”), stilted animation, and stupid plots. Only funny if you’re into that post-modernism, premature nostalgia crap.

The best animation definitely went to Devil Went Down to Georgia. Painstakingly crafted puppets move so smoothly they seem to be walking all by themselves. The short was more movie-like than any other animation I’ve ever seen. The score was performed by none other than Les Claypool (Primus), and lemme tell you, I never wanted to do a jig to a fiddle more. 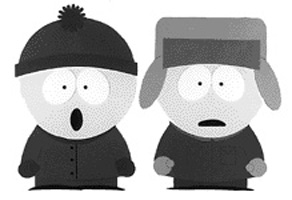 My three choice picks are Ah L’Amour,Yes, Timmy, There Is a Santa Claus, and The Spirit of Christmas. (Hmmm, two of them have an Xmas theme. COINCIDENCE?) Ah L’Amour is the riveting story of a stick figure who politely asks girly stick figures for dates, only to be shot down and hacked to death (“I NEED MY SPACE!!!” one screams before chopping him up with a machete). In the end, the Rutles were right: all you need is cash. About Yes, Timmy…, I’ll only say that St. Nick has one sick sense of irony. Not one for the kiddies unless you want to traumatize your bratty nephew who always rubs snot on your pantleg (go on, he deserves it). The Spirit of Christmas, the prototype for South Park, consists of a bloody fight that breaks out between Jesus Christ and Santa Claus over who is the true Spirit of Christmas, but the real humor lies in the four guttermouthed little boys who witness the battle. A sample: “Hey, you can’t sing Christmas songs, you’re Jewish!” “Okay, (singing) Dreidel, dreidel, dreidel, I made you out of clay!” “That song sucks! Your religion sucks!” “STOP OPPRESSING ME, YOU FAT FUCK!” I didn’t even hear half the dialogue, the audience (myself included) was roaring so loud.

So ends another spew-filled S&T. Hope to see you doubled over and retching next year.

Creepshow Mary – with High Defiance at The Rat – Review 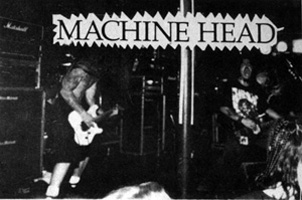