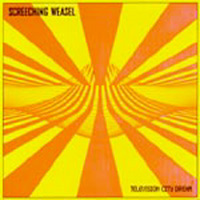 Screeching Weasel is kinda like a case of herpes – they’re really tough to get rid of. They’ve broken up more times than Elizabeth Taylor, but they haven’t gotten fat (although now they’re on Fat), they’ve gotten back together more times than The Who, and for the same reasons – they’ve got bills to pay. Television City Dream is touted (by their label, at least; that’s what labels do, they tout) to be a return to the raw, no-frills punk rock of BoogadaBoogadaBoogada. The production is similar, granted, and the lyrics probably speak as much of honest, day-to-day-in-the-life-of-a-suburban-punk as they ever did (you decide what that really means), but is it the same? No, of course not. Times change, topics change, and naiveté is a one way street. That’s not to say Television City Dream is a self-conscious album, but, to these ears, there ain’t no update necessary for “Dingbat,” “I Hate Led Zeppelin,” “I Wanna Be Naked,” “Hey Suburbia,” and countless other accidental punk gems. Perhaps to “the kids,” the ones who pay Ben and company’s rent anyway (I get this shit for free cuz I have a business card that says “Crabby Critic.” I had the P’s inverted to get more work.), this might be “the dope shit,” “da bomb,” or whatever, but it’s too mature (by punk standards) to be on par with Boogadax3.

Judged on its own, Television City Dream has some good rock songs and a few over-caffeinated angry-young-punk ditties. But gone are the days of on-the-mark lyrics and sloppy musical rampages that were punk cuz they weren’t very good at being anything else. These are well-constructed songs with verses, choruses, intros, solos, and pleasant harmonies (not overdoing it, not leaving it sparse). If you’re into puck rock and Ramones-based punk, check out Storm the Streets by Ben’s other band, the Riverdales. Simple, catchy, strong melodies with almost no harmonies, and as mid-tempo as Television City Dream, only a lot more fun to bop to.
(PO Box 193690 San Francisco, CA 94119) 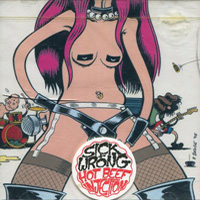 God Lives Underwater – with The Women of Sodom, My Life With the Thrill Kill Kult, Lords of Acid at Avalon – Review

Against Me! To Release “Russian Spies”/”Occult Enemies” Digital/7″ Offering On June 14 – News