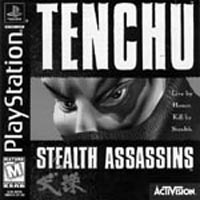 Tenchu is in that elite class of video games, so unique and interesting it warrants purchasing an entire game system for the simple pleasure of being able to play it. Comparing it to the run of the mill destruction a go-go, blow up the universe violence orgy, is akin to putting a John Woo movie beside one by Akira Kurosawa; what is at work here requires far more patience but is infinitely more rewarding and downright beautiful in its execution. At its core, Tenchu is a very simple, 3D Ninja adventure game, where your success is based on your ability to kill without being seen and the completion of your missions.

Set in feudal Japan, you work for a local Warlord and run ninja errands. Now ninja errands are very glamorous, they include a couple assassinations, a little courier work, and the occasional annihilation of a zombie cult. It is honorable for you to kill without being seen. You get to slit throats, chop off heads, and eviscerate opponents without giving them a chance to see you; but don’t kill cats, Geishas, or the occasional farmer, since this is bad. Killing well requires oodles of patience and a lot of practice, but it is one of the great joys of the game, and you will be well rewarded if you master this practice. The occasional violence is extremely intense; blood ejaculates from severed limbs and gaping wounds, but it is an earned violence and you are not encouraged to unleash your wrath in a haphazard way. From the player’s perspective, the 3D action is not very different from Tomb Raider, with a camera following the character and repositioning itself automatically to provide a good sense of what is going on around you. The graphics are choppy as hell, but the action and the amazing music keep the mood going. Mastery of movement takes some getting used to, but the controls are easy to keep track of and grow on you over time; this is the most varied and interesting one-button fighting game I’ve encountered. One serious disadvantage becomes apparent when characters are forced to confront an enemy face to face (this does happen). The game never provides combat training, so when facing bosses, beginning players run the risk of getting their asses kicked by each level boss; if confronted by two grunts, chances are you will be seriously injured. 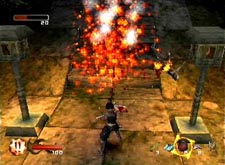 Out of the ten missions, I was two-thirds of the way through the game before becoming a skilled fighter; the only advice I can offer to beginners is learn how to block effectively and run away if confronted by two people at once. I have to reiterate the Kurosawa comparison – it is a totally unique experience direct from Japan; it takes place during the same period of medieval civil war that movies like Throne of Blood and Seven Samurai depicted. Feudal Japan was a fascinating, isolated, violent culture, and this game actually manages to capture some sense of what that period of history must have felt and looked like. Apparently, this game was a big hit in Japan, but almost didn’t get released in the U.S. because of violence and other standard business snafus. I’ve read that the version released here is a vast improvement over the Japanese release, with more levels and better graphics. Had Tenchu not made the trip over the Pacific, we would have been denied an unparalleled gaming experience. It makes me wonder what other wonderful toys those folks get to play with while we waste our time with generation after generation of Doom clones and fighting games. 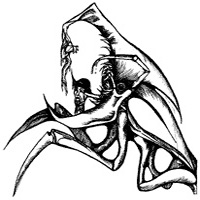 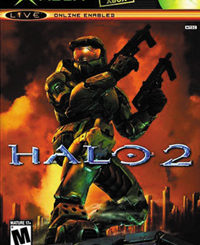