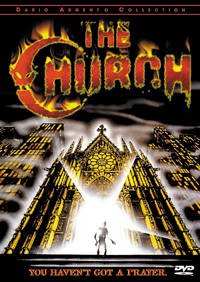 Alrighty then, Anchor Bay Entertainment, you got me… I’ll admit you are the King of Italian Horror Releases. Just when I think you’re done, you hit me with another pasta-land buffet of succulent splatter. My lid is off to you because not only are you releasing them, but you’re doing it right. Some cheap-jack companies have put out rare films in a format that doesn’t improve upon the grainy, edited versions we all rented years ago at Gus’ Video Emporium. But not Anchor Bay. They realize and respect the importance of securing the complete uncut European prints of such genre masters as Dario Argento and Lucio Fulci. Not only can we now see these films as their visionary directors intended, but they’ve never looked or sounded soooo good. And don’t forget about those extras! I’m starting to drool…

First up we have the new entry in the Dario Argento Collection entitled The Church. Actually, this film was co-written and produced by Argento but directed by his protégé, Michele Soavi. Soavi is best known for Cemetery Man, a surrealistic zombie epic starring Rupert Everitt. The Church was originally intended to be Demons 3 but was rightfully re-titled. There are many more thematic elements in The Church than in the rip-’em-open Demons series. The Church begins in a medieval village under suspicion of Satanic allegiance. A stigmata is found on a maiden’s foot and then a squadron of bad-ass Crusader Knights embarks on a head-cleaving massacre. All of the butchery unfolds under the musical push of Philip Glass’ Floe. The ensuing corpse pile is then deposited in a giant pit and a cathedral is erected on the site in order to contain the evil below. Unfortunately, in the present day, the demonic force is accidentally unleashed and the church undergoes some sort of primeval lock-down. The people caught inside are forced to suffer increasingly bizarre deaths by each other’s hands and by Hell’s minions. The camerawork and visuals are extremely artistic, but not to the point of being distracting. Some of the images will stick with you, like the giant cross that gives way and falls endlessly into the darkness. Other scenes of note include massive jackhammer trauma, a rape by Satan, a winged demon engulfing a beautiful naked girl, and a potential escape thwarted by a rushing subway.

The DVD release of The Church is presented widescreen (1.85:1) and includes the trailer and a Soavi biography. The clarity of the transfer truly complements Soavi’s dreamlike multi-color approach (a very Argento-like quality). I never realized that the soundtrack was by Goblin and Keith Emerson until it burst forth gloriously from my home theater. 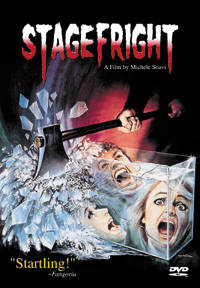 The next release is Michele Soavi’s directorial debut entitled Stage Fright. Up to that point, Soavi was everywhere in Italian horror. He had small roles in many films like Opera (as a murdered cop), The Grim Reaper (as a cannibal victim), Demons (as the metal-faced ticket-pusher) and A Blade in the Dark (as a stab-happy transvestite). Argento saw such promise in him that he allowed Soavi to film behind the scenes on many of his classic films like Phenomena and Opera. This led to the outstanding documentary Dario Argento’s World of Horror. Finally, in 1987, Soavi directed Stage Fright, which instantly brought him a huge, loyal European following.

The basic premise is that of a slasher film, but here it’s done with gallons of style and wit. The opening scenes of Stage Fright had me wondering aloud “What the hell???” But it soon became apparent that a group of actors were rehearsing a musical about a serial killer sporting a giant freaky owl head. One of the ladies in the show (Soavi’s real girlfriend) sprains her ankle and is taken to the nearest facility – a mental hospital. Ironically, a real serial killer escapes and follows her back to the theater. At this point, the eccentric director decides to bolt everyone in overnight for an intense rehearsal. Unfortunately, the psycho pick-axes a cop in the face and then manages to get locked in with the performers. The one-by-one savagery that follows is extremely suspenseful and graphic. No violence is implied here. No one is safe… even in numbers. Arms are lopped off by chainsaw, chests are power-drilled through and not even a pregnant woman is spared. She’s literally ripped in two, her friends only rescuing her top half. Sick stuff, but very well-orchestrated. One twistedly ironic scene has the killer posing as the fictitious killer in the play. During a death scene, he stabs the hell out of the actress while everyone applauds the realism of the scene. The actors catch on, the killer disappears, and the girl dies before revealing the hidden location of the only key to freedom.

My only prior experience with this film was with the original Imperial VHS release which looks like it was filmed through cheesecloth. Anchor Bay, however, secured the European print and presents it in widescreen (1.85:1) with the trailer and a Soavi biography. This is another hypnotic DVD experience with beautiful colors, dazzling camerawork, and a lush musical score. 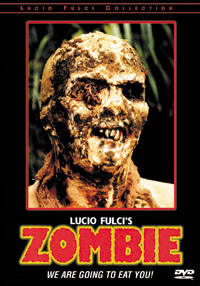 Anchor Bay also recently released the Lucio Fulci flesh-ripping classic Zombie (1980). Roan Entertainment had this film out in the ultimate laser disc package, but the new DVD looks even crisper. Apart from the glorious restoration of the uncut widescreen (2.35:1) film, the DVD also has an audio commentary with star Ian McCulloch and the Diabolik Magazine editor, TV spots, radio spots, and the trailer.

This particular film screwed me over a couple of times. When I was ten, I was in a New York subway and I came kisser to kisser with the giant Zombie poster (on the DVD cover). In screaming letters it said “We Are Going to Eat You!” I believed it and that night my dreams featured the undead with eyeless worm-infested sockets. A few years later, I actually saw the film and could not shake the image of the old woman zombie. As a result, twenty years later, this film still gives me the heebie-jeebies. I also had forgotten how extremely disgusting Lucio Fulci can be. Seeing the gore in all its clarity and quality makes the geysers of red hit your senses full-force.

The premise of Zombie is that Tisa Farrow’s father’s boat floats into New York harbor with a fat, decayed, flesh-eating ghoul who lunches on some cops and then disappears into the water. Tisa enlists the help of a reporter (McCulloch) to head to the Caribbean in search of her Dad. Upon arrival, they soon discover that human-chewing corpses are attacking the natives. Is it some kind of virus, or is it voodoo? Who cares, because what you will see in this film will blow you away. For example, a main character’s entire throat is bitten out in one bloody chunk that in turn unleashes a massive flood of arterial juice. Here you’ll also find the infamous 10-inch-splinter-in-the-eye scene. Slow, agonizing, and snapped off at the hilt. A must-have DVD, but not for the casual movie fan. 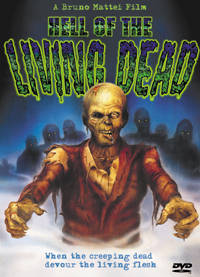 To round out Anchor Bay’s recent horror catalog we have a long-forgotten little gem called Hell of the Living Dead. You may have seen this gore fiesta back in the ’80s under the title Night of the Zombies. It was widely considered a cheap rip-off of Dawn of the Dead with some stock nature footage to help the running time. Critics basically hated the film, but it still did very well overseas and was banned as a “Video Nasty” in England. I was one of the few who actually enjoyed the film because I saw it more as a tribute to Dawn… even to the point of using the exact same Goblin music. This DVD looks great and there’s plenty of fun to be found here. Plenty of groaner dialogue, idiotic characters, and huge amounts of way-over-the-top bodily dismemberment. For example, one of the main characters has her screaming mouth invaded by a zombie hand that quickly rips out her tongue and then smashes forward to pop out her eyes from the inside out. Really sick stuff, and there’re plenty of similar scenes. The story is about a virus that creates cannibals and the SWAT team of knuckleheads sent to New Guinea to investigate.

Once again, the film looks perfect and is uncut and widescreen (1.85:1). This release also includes an interview with director Bruno Mattei, the trailer, a poster, still gallery, and the director’s bio.

All in all, a great squadron of horror DVDs available at very low retail prices. Keep up the great work, Anchor Bay, and keep the gore flowing!
(www.anchorbayentertainment.com) 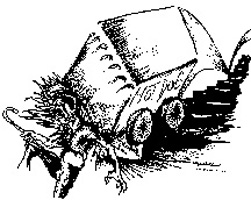 The Evil Dead: Book of the Dead – Review