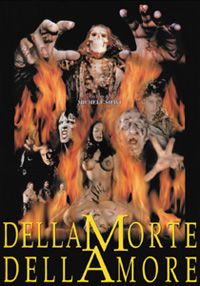 WARNING! Are you opposed to all forms of nudity and sexuality? Does the mere thought of gore make you ill? If you just answered, “Why yes… that’s me…,”make sure you steer clear of www.revok.com. However, if you are a “normal” human with a taste for true entertainment, I highly suggest you visit the fine folks at Revok Film Prodigies. At this site, you’ll find a mouth-watering assortment of all things gruesome and exploitational. There are tons of rare videos, DVDs, and movie memorabilia that any collector would be proud to own. If you click on the museum link, you can delight in the sight of hundreds of obscure posters, bills, and lobby cards from such classics as Make Them Die Slowly to Dawn of the Dead. The best part is that you can buy ’em if you can’t live without them. There’s so much cool stuff for sale, you can even buy a Revok thong.

Of course, my personal draw is the movies themselves. And I like them uncut and original. I’ve always despised restrictions on what I should be exposed to, be it parental control (back in the day) or governmental. But it’s inescapable. Even the bag of chips I’m staring at says things like “Suggested Serving: 8 chips.” Now I’m kinda pissed. I’ll eat chips until they’re gone or I’m sick of them. But what’s infinitely worse than such lame-ass “suggestions” is the imposed restriction with no choice. This happens daily in the film industry. When a film is shot… just show it. Don’t edit it down unless you have continuity problems. Thousands of movies have been created according to the director’s vision, only to be hacked by either the MPAA ratings board or some corporate toad.

A case in point would be Dario Argento’s Phenomena, starring the super-hot Jennifer Connely. Argento, a certified master of cinema, gets his labor of love chopped down by 20 minutes and idiotically re-titled as Creepers for its incomprehensible U.S. release. Morons in action, to be sure. In the past, if you wanted to see the original versions of such films, you were forced to seek out European bootlegs. Thankfully, distributors have begun to see the light, and you can now purchase pristine uncut DVDs like Phenomena at your local Wal-Mart. Times have sure changed for genre fans. But there are still plenty of films that haven’t been picked up by major companies like Anchor Bay. Certain films are just too difficult to track down in their uncut format. Revok is a company that dares to seek out the rare European versions and release them on DVD at very reasonable prices.

Recently, I had the pleasure of checking out a couple of their catalog offerings, and I was truly impressed. I was expecting much lower quality due to the rarity of the source material. However, both discs were of stellar quality and were in English with no annoying subtitles. Thank you, Revok, for realizing the simple pleasures of us twisted viewers. 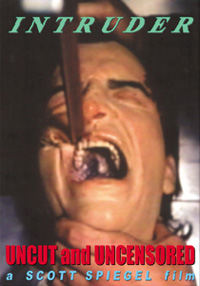 The first film is called Intruder, and it’s a great little throwback to the ’80s, when the slasher film was king. In this sadistic who-done-it, Scott Spiegel presents us with a simple plot, and then twists it with innovative filming and way over-the-top gore. The owners of a supermarket decide that it’s time to close down for good, and they call on their night crew of teens to stay over and help. Rene Estevez and Sam Raimi (The Evil Dead) are some of the potential victims of a savage killer. As the night progresses, folks get freakin’ destroyed one by one. When the wusses at Paramount picked up this film, they excised all of the nastier moments. Revok’s version has restored all of the super-gory murders, and you really need to check them out. You can see eyeballs squished, cleaver attacks, a meat hook skewering, and a few other showstoppers. One scene has a guy’s head slowly squished by a trash compactor. He gets caught right below the nose and the top part of his head bursts in all directions. Another classic moment involves a giant band saw bisecting someone’s screaming face as they’re pulled through like a side of beef. Blood and teeth and gore, oh my! At Intruder‘s climax, the killer reveals himself and his motive and is subsequently butchered… but not before getting in a real plot twist. Look for the cameo by Bruce (Ash from The Evil Dead) Campbell.

The second DVD is the uncut version of Dellamorte Dellamore, directed by Argento’s protégé, Michele Soavi. This 1994 classic is one of the most sought-after titles for fans of zombies and Euro-horror. The print looks amazingly clear even compared to the cheesy Americanized VHS release under the title Cemetery Man. Dellamorte… takes place in northern Italy, in a graveyard that mysteriously restores all bodies interred therein as murderous, bloodthirsty walking cadavers. Rupert Everett stars as Francesco Dellamorte, the caretaker who nonchalantly destroys all the “returners” by splattering their undead brains. He is assisted by Gnaghi, a bald mute who develops a crush on the mayor’s dead daughter. Francesco meets the super hot Anna Falchi during her late husband’s funeral. She decides to mourn her loss by banging the supposedly impotent Francesco right on top of her hubby’s grave. Anna likes to get naked, and she definitely has a great body with some of the largest nipples in the cemetery. Well, her deceased lover pops up from below, is killed again, and then Anna herself drops flat out dead. But don’t worry… she comes back in more ways than one. If those proceedings weren’t strange enough, the film rapidly grows more bizarre. Gnaghi gets himself a girlfriend, corpses continue to rise (one even bursts from the grave on a motorcycle), and Francesco begins to ponder whether he should wait for people to die the first time before he blows their brains out. The whole film plays out like a bloody love story within a dream with a twist ending. Infused throughout is a very unique style of filming with deft touches of humor. The action and gun play is surprising and engaging, and the film will easily hold your interest. I won’t ruin the rest for you. Definitely a favorite, and well worth checking out. Revok has the best version of Dellamorte I’ve ever seen. Check out their goods… they’re for real. Revok, keep up the great work!
(www.revok.com) 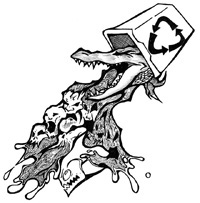 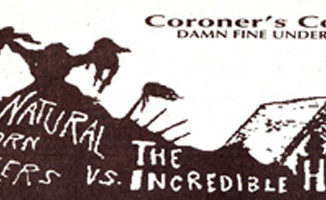