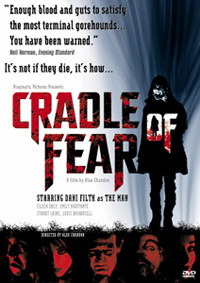 Image Entertainment has recently put out a squadron of very interesting horror/exploitation titles. One of the most notable recent releases is the Alex Chandon film Cradle of Fear. This movie is something else. I was expecting not to dig it as soon as I saw that it had that “shot on Uncle Jim’s camcorder” vibe. However, once I saw the inventive camera work and the enthusiasm displayed both on and off-screen, I changed my mind. Without sounding too negative, I’d classify this flick as “gorenography.” Elements of characterization and plot ultimately take a back seat to the violence. I’m not saying it’s like fast-forwarding from sex scene to sex scene, but the anticipation of seeing what these sick puppies will do next is what drives the film. Virtually every known way of mutilating a human body is trotted out in deep red glory. And I have to say, the effects are way over-the-top disgusting… I enjoyed them all. I was pleasantly reminded of the good ol’ gory days when films like Dawn of the Dead and The Evil Dead offered a non-stop barrage of interpersonal mayhem. These were the types of films where, if you were a kid, you knew you were screwed for life if Mom or Dad entered the room. God help you if a younger sibling caught a glimpse of some zombie noshing down on some screaming guy’s innards. Flat out screwed I tell you… I’ve been there.

Cradle of Fear is about Kemper, a serial killer hypnotist presently being held captive in an insane asylum. Kemper manages to continue his evisceration spree vicariously through his servant, “The Man,” played with demonic delight by Dani Filth (from Cradle of Filth). Detective Neilson is a strung-out detective always one step too late as he trails Dani’s destructive path through four short but potent tales. The first tale is Nightclubbing in which a woman in a Goth bar picks up Dani. They adjourn to her apartment where he demon-rapes her and leaves. Our heroine invites her girlfriend over for a little sleepover. And just when we think we’re about to see the holy grail of unexpected cinema, the impromptu lesbian scene, something nasty happens. Exploring fingers are bitten off by some Satanic offspring before it rips its way out of the girl’s stomach.

The second tale, Hatching Plots, is about a breaking and entering that goes seriously wrong. Mutilated corpses and hauntings galore. Story three, Driving Over the Influence, is about a thrill-seeking couple that does some real damage with their car. Once they retire for a little sex, things get really twisted. The guy is an amputee and during their lovemaking, the woman starts seductively licking his stump… what a crowd pleaser.

The final tale, Final Warning, is about a guy who becomes addicted to a website. The site is called The Sick Room, and if you become a member, you can direct the action in your own snuff movie. Wanna see some poor schmuck attacked with a knife to the head and then have his legs sledge-hammered into pudding? Just double-click away and it happens right on your screen while your credit card is charged a couple grand. The film ends with a massive bloodbath as the detective, “The Man,” a bunch of guards, and Kemper all converge in a small cell. Limbs fly, guts are pulled, faces are blasted away, and demons spring forth from gaping wounds. Though it’s not the “important” groundbreaker that perhaps the filmmakers were striving for, at least Cradle of Fear‘s heart was in the right place: Spurting and sliding down the wall. For the more genre-savvy viewer, there are some neat in-jokes/homages to be found. For example, there are some sound bites from Dawn of the Dead and the hammer/chisel to the teeth scene from Last House on the Left is taken to its sick conclusion. The unrated, 120-minute film is accompanied by some creepy menus, two theatrical trailers, a still gallery, and a behind-the-scenes featurette. Pick this one up, put the kids to bed, and prepare to be nauseated… Pleasantly so. 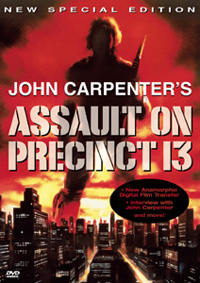 Another sure-fire winner from Image is the Special Edition of John Carpenter’s Assault on Precinct 13. I’ve always liked this film, and it’s great to see it again after so many years. Since it was made in 1976, it’s interesting to see Carpenter’s style before he became famous two years later with Halloween. Assault… has been described as a cross between Howard Hawk’s Rio Bravo and George Romero’s Night of the Living Dead. The exciting story is about a group of punks on a killing spree who lay siege to an abandoned police station. Inside the prison are some officers and some death row convicts who must combine forces and fight or die. No one is safe from the violence that ensues… not even a little girl slurping an ice cream cone. If you aren’t expecting Academy award performances, there’s plenty of fun to be had here.

Image went the extra mile and put together quite the DVD package. Not only do you get the new anamorphic high definition digital film transfer in the original aspect ratio (2.35:1), but there’s an interview with director Carpenter and star Austin Stoker, radio spots, a still gallery, a trailer, Carpenter’s isolated score, and best of all, the running audio commentary by Carpenter. 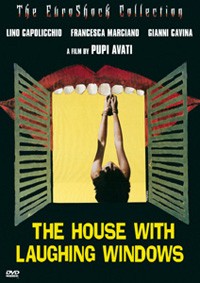 Rounding out Image’s offerings is The House With Laughing Windows, a very rare Italian thriller from the EuroShock Collection catalog. This unrated 1976 film runs 106 minutes and is in Italian with English subtitles. Sometimes I’m glad when an Italian film isn’t dubbed into English, because it’s often poorly done. Instead of being a moody, exploitation experience, sometimes a film turns into a comedy for Americans to make fun of. Using subs, director Pupi Avati has created a haunting little gem that retains its feel many years later. The film is about a restoration specialist named Stefano, who visits a small Italian village in order to restore a very disturbing painting found in a church. The decaying fresco shows the slaughter of St. Sebastian, complete with multiple stab wounds. As soon as restoration begins, creepy murders abound and Stefano is caught in the middle. A neat little film with a pretty disturbing opening credits sequence: A screaming man is repeatedly stabbed over and over. Strange… but pretty cool. The DVD also comes with a retrospective documentary, a trailer, filmographies, and a lobby card gallery. Keep ’em coming, Image!
(www.image-entertainment.com) 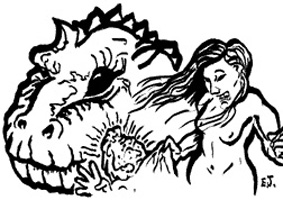