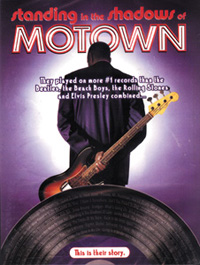 Standing In The Shadows of Motown

A documentary on the backing musicians (known as The Funk Brothers) who made Detroit’s premier soul label tick, Standing In The Shadows Of Motown is a difficult film to criticize. The music is untouchable, the subjects are long overdue for some well deserved attention, and the fact that the filmmakers’ hearts are in the right place is unquestionable. Fortunately, this translates into a fascinating film… most of the time.

The criticisms are small but glaring, so I’ll get them out of the way quickly. Sometimes, the performances (the Brothers themselves fronted by such singers as Joan Osbourne, who somehow manages to justify her existence here) are occasionally faded out early to get back to the narrative. Come on: we, the audience aren’t going anywhere. Let the song finish. And occasional recreations of anecdotes are a bit disruptive, and a little cheesy. A straighter documentary feel would have served this better.

None of the above, however, should stop you or anyone who even pretends to love popular music from seeing this film. Repeatedly. The story is as interesting as the music is brilliant, and the bizarre and intricate narrative pumps new life and appreciation into music that is engrained on the brain of every man, woman, and child born after 1945. It’s also nice that the filmmakers don’t make this about Motown. It figures heavily, of course, but this is about the unsung heroes. Luminaries such as Marvin Gaye and The Four Tops are mentioned only so much as they relate to the Brothers. A fantastic documentary.
(www.standingintheshadowsofmotown.com)