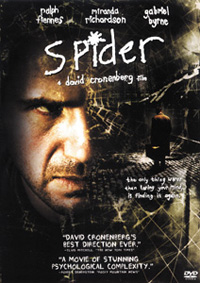 Spider is the kind of film that actors cream themselves over. And, if the included “making of” documentaries are anything to go by, star Ralph (pronounced “Rafe,” by the way) Fiennes did just that, eventually resulting in this David Cronenberg directed character study.

Fiennes is, naturally, the title character, a man who barely communicates, and whose obsessions make the meat of the film’s narrative. It’s near impossible to explain without giving the whole thing away, but suffice to say Spider works not just as a vehicle for Fiennes’ tour-de-force performance (as well as an amazing Miranda Richardson), but also as a psychological thriller and, in a strange way, a horror film.

A few basics: Spider has been released from a maximum-security asylum to a halfway house of sorts, with an eye towards his reintegration into the real world. He is a man with a major demon, however, and the film documents what goes on in his mind as he tries to reconstruct exactly what happened to make him the mumbling weirdo he is today.

Director Cronenberg keeps the audience guessing, taking us in and out of Spider’s mind, throwing flashbacks that only truly fall into place during a second viewing, and altering reality at a few key points. Spider cannot be watched passively, as the casual viewer will be completely lost at about the halfway mark. This isn’t to say that the film is difficult to decipher, far from it. It simply requires active anticipation, which is ultimately rewarded with an ending that many may see coming, but is no less devastating as a result.

There are a few minor quibbles, however. The end wraps things up a little too explicitly, flat out stating that which we already knew. There are also a few touches meant to throw you off the scent, which are ineffective and ultimately distracting. Also, unless you didn’t get it at all, avoid Cronenberg’s commentary: He essentially explains the entire film, bit by bit.
(www.spiderthemovie.com)