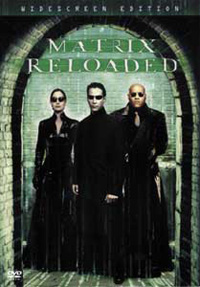 As Mr. Varney has said, the new Matrix films are sequels to a film that didn’t need a sequel. This “trilogy” shows the downside of what can happen when creative control ends up in the hands of the artists alone.

I’m not suggesting The Matrix Reloaded would’ve benefited from test groups or studio interference. No, definitely not. But the Wachowski brothers needed some kind of foil, because the one thing that sticks in my craw about this film (as well as The Matrix Revolutions, but that’s a different review) is plain old-fashioned self-indulgence. Nowhere is this more apparent than the universally-reviled rave sequence. It’s long, it’s pointless, and it’s not anywhere near as cool as it thinks it is. Which can be said about the film as a whole, actually.

Another issue that might have benefited from a little more friction is the film’s pacing. Watching this is much like riding in a car with someone who’s still learning how to drive stick: Go fast, stop dead, talk, go fast again, talk some more, go fast, stop cold. The flow is absolutely dreadful. Granted, the action sequences can be spectacular, particularly the freeway chase sequence. But when Neo (a typically vacuous Keanu Reeves) fights something like 100 Agent Smiths (a whole bunch of Hugo Weavings), it’s like watching a hyperactive teenager play a video game. How many times can you see someone knock someone else down with a third person before it gets old? This film dares to ask that question, and the answer is: About half as long as this fight sequence lasts.

The Wachowskis deserve loads of credit for creating films that have more thought behind them than the sum total of most Summers’ entire output. And as someone who fancies himself a bit of a theology geek, I have to say that retelling the Christ story as a technological us vs. them is brilliant. But the final product swerves uncomfortably close to another Keanu Reeves effort, Johnny Mnemonic, and getting anywhere near that thing is too close. Way too close.
(whatisthematrix.warnerbros.com)