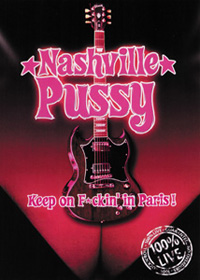 Keep on Fuckin’ in Paris (MVD)
by Duke Crevanator

I first saw Nashville Pussy perform in a cinderblock building off a dirt road in the middle of a huge cornfield in Kansas in 1997. It was so middle of nowhere, it creeped even me out, and I LIVE in the middle of nowhere. The temperature was 90 degrees outside at 10pm, and about 100 inside the club. There were maybe 120 people there, but it was total rock’n’roll chaos (ironically, I’ve also been assigned a Zeke DVD, and I saw them for the first time at this show as well).

Many years have passed since then, and Nashville Pussy are doing exactly what they did back in that cinderblock club. Same gimmick, same gradual progression of disrobing by Ruyter (well, not totally, just down to her bra), and same barrage of Southern-fueled rock with almost zero breaks between songs. Hell, if it ain’t broke, don’t fix it. That slice of Southern wisdom fits the Pussy quite nicely.

This is most certainly a professionally-filmed DVD. I played it through my 600-watt surround system, and believe me, it rocked the Crevanator Compound way up here in the wilderness of New Hampshire. I can only guess how many cameras they had for this show. I’m guessing at least six. So you definitely get many different views of the stage. At times, it’s overkill. For example, at one point, Ruyter takes a sip of water, and during that sip, we get three different camera views. But that’s just a minor problem. Overall, it is well-produced visually with exceptionally well-done audio. Seriously, you can turn off the TV and listen to this as one helluva great live album, if you so choose. Of course, the biggest miracle about this high praise is that this was all done by FRENCHIES! Who’da thunk it? When was the last time the French did anything good?

On the main part of the DVD, you get a 16-song set, including tons of classic material from their Let Them Eat Pussy and High as Hell albums, along with tracks from 2002’s Say Something Nasty. True to their roots of covering great songs, you also get an AC/DC cover (“Shot Down in Flames”) and even better a Turbonegro cover (“Age of Pamparius”).

The bonus features are pretty decent as well. You get a music video of “Say Something Nasty” with a great Roller Derby theme, a photo slideshow, and also a song lyric feature. Weirdest of all is the “Sing Along” option for a good chunk of the tracks. Yes, they replay the selected songs with subtitled lyrics so you can train to be the next Blaine. I just wish they’d used the bouncing ball technique, for old time’s sake. Maybe on the next DVD…
(www.musicvideodistributors.com) 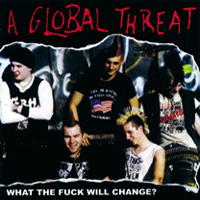 A Global Threat – What the Fuck Will Change? – Review