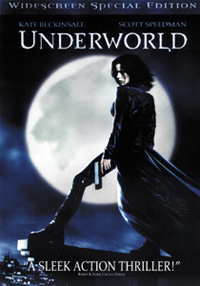 Take a look at the cover. Now picture what the movie’s like. Guess what? You’re right. The cinematography is gorgeous, all the actors are hot (or appropriately gnarled), and if you don’t know how it ends after the first 10 minutes, you must not speak the language.

Kate Beckinsdale (who is generally in more “serious” films) plays a “young” vampire (who is merely a few hundred years old) who is a death dealer. You see, there’s a war between the lycans (werewolves) and the vampires, and since Kate Beckinsdale is the star and she’s a vampire, the werewolves are the bad guys.

The “twist” here is that the werewolves have developed (or stolen… whatever) a luminous bullet, which means that if they shoot a vampire, they die as if they were exposed to sunlight. There’s also a traitorous vampire (this is not a spoiler. Again, if you don’t know the guy is a weasel after two seconds of screen time, turn on the subtitles).

To be fair, Underworld is not about the plot, and it’s sure as hell not about the performances. It’s all about the atmosphere, and on that count, it succeeds admirably, if somewhat generically. It looks exactly like films like this look: Picture The Crow, Queen of the Damned, etc. Underworld is a better film than either of those (although, to be fair, director Len Wiseman was able to complete his without his star dying).

Underworld is enjoyable, but it’d be nice if someone made a serious movie like this, instead of merely a dark one. It’d also be nice if they made one without trying to tie it in to “modern” Goth/industrial club culture. But until then, Underworld is a good time.
(www.sonypictures.com) 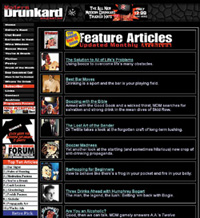