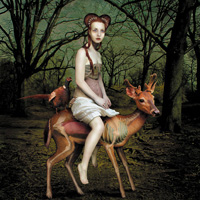 An interview with Ryan Obermeyer
by Jamie Kiffel

Somewhere between panic and stillness, in the wedge of space between hope, dread, and oblivion, standing slighting stunned in front of the shadows and balancing – uncertainly, vertiginously, lightly tonguing the edge of “not” – this is where artist Ryan Obermeyer‘s works precariously rest. Bones, claws, and captured creatures drift seamlessly into one another, seeping inside shared shells and glowing dusky shades of some hyper-real dreamscape, thanks to Obermeyer’s scrupulous digital work.

“When I was younger, I always told people I’d be an artist and a shark studier,” Obermeyer says, then laughs. It’s a laugh that rides the crests of his conversation, that in anyone else would be unnerving, but within Obermeyer’s overwhelming gentleness, it’s only reassuring with a dash of self-effacement. “I’ve always been attracted to water and marine life – usually things that aren’t typically considered beautiful” – he pauses for a split second, rearranging his thoughts, twisting, doubling back – “I’m not trying to make my work dark, though I might take something that sounds dark on paper. Animals that have shells, that have danger involved in some way. I’ve always owned spiders, scorpions, snakes, things I can respect without being involved with physically. I like things I can admire from a distance without getting physically attached.” 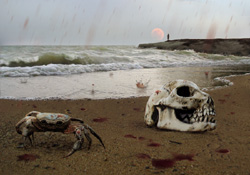 His style is not Goth, but strange: Beautiful in a nearly grotesque way. He’s become a good friend of Melora Creager, the creator/leader of the cello-rock band Rasputina, and created three album covers for the band before joining the members on their latest tour.

“Um… do you know what amonites are?” he asks, that small laugh starting just under his words. “They’re these prehistoric cephalopods with nautilus shells. Lately, I’m kind of obsessed with them.” He laughs aloud. “A musician came to me with the idea of a botanical setting (for a cover), and I’d just gotten through working on flowers, so I wanted to challenge myself. So… I decided to use the cephalopods as the botanicals.”

I ask him if he sees those thick-shelled creatures as sentinels, perhaps guards for a soft core. He half-agrees. “Maybe they represent safety, maybe my having some control over fate with things that could potentially harm me… I don’t know, I haven’t talked to Dr. Freud,” he considers lightly.

Then, “I have a strange relationship with my work,” he tosses out. “I feel almost disconnected from it at times. I don’t really know where it’s going when I’m creating it, and I see it – kind of in retrospect. Without sounding stupid or pretentious…” he pauses, and somehow, he’s inwardly laughing at himself, or maybe at the whole life experience. “It kind of tells me where it’s going or directs itself,” he finishes. “Maybe when it’s a good piece of work, you should be willing to compromise your initial idea, let the art take over.”

And other times, he lets a muse pitch in. “I went to see one of Rasputina’s shows,” he says, describing how he toted his artwork to the show and managed to get it under the nose of the band’s marketing director, “and Melora and I hit it off. We became really good friends – the way we work, our sensibilities about things.” He collages photos of creepy crawlers and graves; she stitches samplers – textile collages – of eyeless babies and rotting lace. And neither one considers their work eerie. Yet Creager is intensely shy, while Obermeyer is surrounded by a clear arc of kindness. 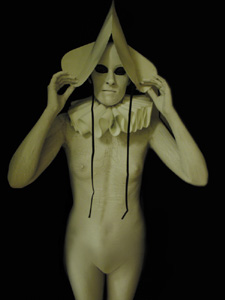 When Creager proposed a cover for the EP Lost and Found, “I had a sketchbook of some ideas I’d come up with: Anatomical dolls you could see inside of, pictures of her, animals,” he says. “She went through the book and said ‘Why don’t you put me on this anatomical doll-deer thing?’ So I made a corset for her in Photoshop that looked like you could see through it. Then I created an image of a doll that looked like her. I think I’ve kind of been lucky in that she respects what I’m doing.” And Creager and he see similar beauty in what others might consider The Weird.

I ask him about music, and I can feel the air jump a little, excitedly. “I think music is my main inspiration,” he says. “I’m obsessed with music, I’m constantly collecting it. I’ve been listening to the singer from Dead Can Dance, Brendan Perry, David Sylvian. I listen to a lot of experimental folky stuff, and Radiohead and Björk.” And, he says, he’s entranced by the challenge of translating audible art into visuals.

“I’m not setting up a straight shot and taking an image,” he adds, describing how he’ll take 50 or more photographs and meld them. “I think what I do is kind of a marriage between photography and painting.” His paintings, incidentally, are startlingly real, evidently one spouse in that marriage with photography.

As for programs, “I’m pretty strictly Photoshop,” he admits, then adds half-apologetically “I’m not a technical person. I taught myself the program. I have an Olympus, too low megapixel to really be using,” he laughs, “but I like the way it works. I’m kind of impatient with technology, so I’ll take whatever’s around.”

He admits that he’s been told he does things the hard way. “I think it gives you more options when the program is harder to use,” he says. “When it’s too easy, you forget to do it yourself. Some people think if you’re working harder than you have to, you’re not doing the best work, but I think the more work you’re doing, the more integrity your work has. I don’t mind tracing a line around each hair rather than cutting it out with the Magic Wand.” I can almost hear him shrugging.

“I’m left-handed,” he goes on, “and have had to learn how to create with the mouse on the right side of the computer. I think it’s good to

change things up, not stick with what you’re comfortable with. I’m kind of contradictory a lot of times,” he realizes. “I don’t want to get out of my comfortable Photoshop zone, but I want to challenge myself.”

And there’s another apparent contradiction: Obermeyer didn’t finish high school, let alone go to art school. “I went to community college in Texas, took basic classes, was working toward maybe art school, but left for New York at 18 for an internship,” he says. He managed to co-launch a business of his own, but after September 11, returned to Texas, where he’s stayed. 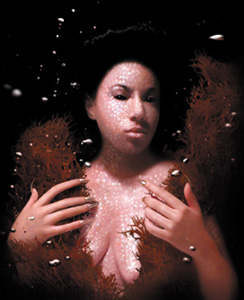 “The fact that I left high school early has never really hindered me in my artistic pursuits, and neither has not going to college,” he notes. “When I went to New York, I just kind of pretended I’d just graduated. Maybe school helps you find your style and vision, but I think I was spending time doing that on my own.” He pauses, and then, in a friendly, don’t-do-this-at-home tone adds, “I would never be an advocate of dropping out. But if it works for you… You can always go back to school, I guess.”

He still toys with the idea of going to art school, himself, but he’s also making a full living as an artist – something he hardly has time to realize is the ultimate goal for most graduates. “I’m 23 now, and kind of glad I got an early start,” he muses. “A lot of my friends were in school, and I felt like I was missing out at the time, but I was working on getting ahead. And,” he says quietly, “I’m proud of that.”
(www.ryanobermeyer.com) 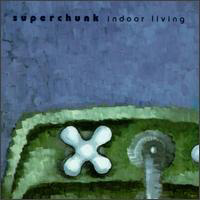 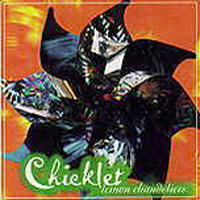