Let’s get something straight here… The purveyor of this site certainly seems to be the salt of the Earth. I’m absolutely convinced that there’s no irony, no wink wink, nothing. This site is pure sincerity. But like most things that are absolutely sincere, this site is creepy as Hell.

But consider the following. This is, chronologically, what you’re presented with (at the time of writing):

Sugar Bush Squirrel in a sweater. 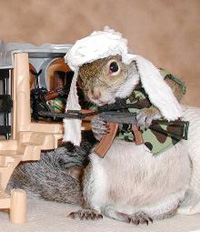 Sugar Bush Squirrel in a remarkably homosexual leather jacket on a tiny motorcycle.

Sugar Bush Squirrel dressed as a firefighter at Ground Zero.

Etc. Now, as I stated, I am 100% convinced that this photographer has the purest motivations, and it’s not like any decent human being is going to argue with feeling sympathy for the mothers of those killed in Iraq. But there’s something intangible, something just plain unsettling about the thoroughness with which these photographs are laid out. Kinda like Elizabeth Taylor and Richard Burton in Who’s Afraid Of Virginia Woolf, you start getting a creeping sense of unease as things slowly spin out of… well, not out of control exactly, but certainly out of the comfort zone. Proceed with caution.
(www.sugarbushsquirrel.com)