The five-track EP (see attached track listing) features the title track and current single, “Late March, Death March” as well as number of recordings previously unreleased in the U.S.  “Radio Silence,” “Candlelit,” and “Default Blues” were recorded during the sessions for Frightened Rabbit’s current full length album, “PEDESTRIAN VERSE.”   A live version of “Oil Slick” was captured during a sold out show at Glasgow’s famed Barrowland Ballroom.  All pre-orders of the “LATE MARCH, DEATH MARCH” EP include an immediate download of “Radio Silence” as an instant-gratification track.  An acoustic performance video of “Radio Silence” can currently be seen at PasteMagazine.com.

Frightened Rabbit frontman Scott Hutchinson on Late March, Death March: “This song takes a fairly commonplace, mundane event (an argument on the way home from a night of drinking) and adds a fair bit of melodrama, mimicking the gasoline effect of pouring drink on an argument, I suppose. I’ve always loved elevating ‘the everyday’ into something larger and louder than it actually is. These small things can seem so serious and earth shattering at the time, then you wake up and you can see how daft you both were.”

The release of the “LATE MARCH, DEATH MARCH” EP coincides with the band’s North American tour which includes a run of dates supporting The National as well as a headlining of their own which kicks off on September 24 at Union Hall in Edmonton (full tour itinerary below).  For more information, please visit Frightened Rabbit’s official website, www.frightenedrabbit.com. 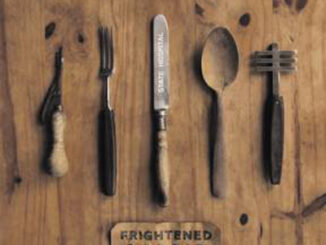 Editors release The Weight of Your Love – News