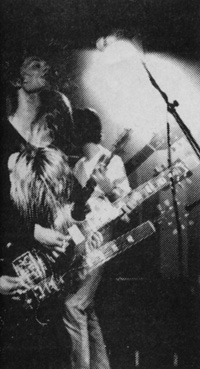 at Venus
by Bob Butman
photo by Laura Roper

A week or so ago, a friend of mine called me up and demanded, “Dude, turn on Arsenio!”

Before I had the chance to voice all sorts of lame excuses about my personal philosophy of T.V.’s over-all non-importance in defining my reality (and assorted bitching), he quickly explained, “Remember that band you saw, Radiohead? They’re on Arsenio!”

No way, Radiohead performing on Arsenio? It seems just like only yesterday that “Creep” (the Radiohead song, not Arsenio) was just a song on ‘FNX that sounded cool. Well, just before this flash of mainstream success, I was lucky enough to catch these guys live at Venus.

The young and dramatically sexual vocalist, Thom Yorke, sang with such energy and emotion that he was drenched in a glistening sweat after the first song. His constant flare and stage charm carried through each song, entrancing the crowd throughout the night. The band’s solid, honest rhythms powered the straight-forward and sometimes poetically simple lyrics. They created a sound that immediately carried you into a groove and allowed you to soak up the meaning, without having to study the lyric sheet in search of the elusive point. Listening to the band, you’d picture glossy musicians tossing their expensively-stylized hair about, but instead you see something quite like the music itself — five pretty normal-looking guys that play aggressively and yet, remain cool and collected while doing so.

After being nearly crushed to death all night, the best and most surprising event of the night was yet to come. Getting to talk with the fledgling superstars was, without a doubt, one of the coolest musical experiences of my life. They introduced themselves politely and humbly, an attitude that’s hard to come by anywhere in the “music industry.” Phil Selway, Radiohead’s drummer, shook my hand, smiled sincerely, and was eager to hear what I had to say. A nice change from the more typical young musician who seem to enjoy only the sound of their own voices.

After a few moments, Phil explained that Boston was the first stop on their American tour, and that he was surprised at the crowd’s excitement and positive response. Because they hail from England, most people don’t realize that Radiohead’s disc, Pablo Honey, was recorded right here in Beantown and is carried nationwide by Capital records.

Unfortunately, Radiohead probably won’t be playing in the New England area again for a while. But who knows, maybe their Arsenio performance will have some effect on their tour schedule. For those of you that weren’t fortunate enough to have seen Radiohead this past month, my condolences. 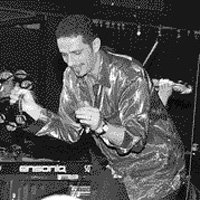